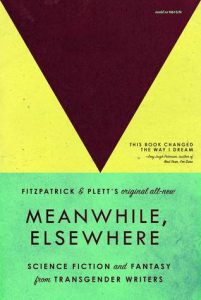 Science fiction shows us worlds of great technological advances and sweeping social changes. It shows us worlds similar to ours where a few fundamentals have changed, or lands beyond the stars vastly different to our own. But it does not always show us what it is like to be trans or queer in those worlds.

Meanwhile, Elsewhere compiles 25 stories from trans writers in a contemporary anthology so amazing that I haven’t stopped thinking about it since I put it down.

Each story has a trans protagonist and often queer/lesbian/sapphic relationships are a significant point, though not always. Sometimes those relationships are just in the background, but they’re still as vital to the characters in making them who they are. Sometimes a character is just a lesbian in passing, but the narrator isn’t part of that relationship. This collection affirms so many ways to be queer and interact with other LGBTQIA+ people in our communities and around us. It’s a delight to read.

“What Cheer” is a soft, half-sad but half-hopeful story about being with yourself (who sort of isn’t yourself) for a day. “Delicate Bodies” is a darkly humourous take on coming to terms with one’s body and getting over your exes during a zombie outbreak. “Satan, Are You There? It’s Me, Laura” deals with its surreal events in a matter of fact way that it takes you along for the ride. “Heat Death of Western Human Arrogance” is a love story between an alien and her lover dealing with their very different paths through life.

There really is something for everyone. And it all feels incredibly thoughtful, gripping and honest, with each writer in the anthology contributing a unique voice and prose style. Nothing feels same-y and, with the massive variety of stories, there isn’t a weak link in the bunch.

Of course, queer sci fi isn’t entirely new. The lesbian vampire novel Carmilla was written in the 1800s, and Melissa Scott has been writing LGBTQ sci-fi since the 1980s. As television and movie visibility for queer characters in these genres increases, so does the variety of stories we are able to tell, experience and see ourselves in. Meanwhile, Elsewhere contributes something of excellent quality to this list.

For anyone who is some flavour of queer and is feeling underrepresented in this genre, for anyone who wants to read more work with a non-cis, non-straight, non-male protagonists, for anyone who simply wants more science fiction with a refreshing variety… read this book.