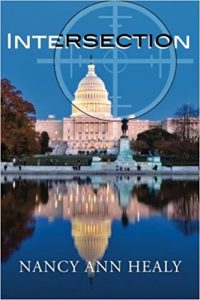 Intersection is a romance/thriller featuring an FBI agent and a politician’s ex-wife. Although I wanted to fall in love with the book—the first in a series—it fell short for me in a number of different ways, and I don’t see myself picking up the sequels.

The novel kicks off with Agent Alex Toles and her partner receiving an undercover assignment to protect Congressman Christopher O’Brien and his ex-wife Cassidy, who have been receiving threatening messages. Alex poses as Cassidy’s new public relations assistant, and a relationship rapidly blossoms between them while Alex tries to get to the bottom of the threats.

There are a couple elements of Intersection I sincerely enjoyed. Cassidy has a six-year-old son, Dylan. Since she’s a single mom, it makes sense that any potential partner would need to be understanding and open to that priority in her life. Alex goes above and beyond. Her quick bonding with Dylan is well-explained by the fact she has a nephew and likes kids, Dylan’s father is too busy for him, and their shared interests (sports and superheroes). I found myself smiling at how cute they were together: particularly when Dylan is “explaining how his trucks could be superheroes…torturing [Alex] with Tonka trucks in the living room,” and when Alex teaches Dylan the license plate game. Their relationship was the highlight of the book for me.

Cassidy’s mother Rose also plays a significant role. She helps Cassidy balance her day-job as a teacher and caring for Dylan by picking him up from school and making dinner often. She wants her daughter to be happy and is totally supportive after Cassidy realizes she’s attracted to women. I was pleasantly surprised by how important extended family and friends were to the overall story. Alex’s partner and his family, her brother, and her former military colleagues all help out at various points. Many of the queer narratives I’ve encountered in literature are defined by isolation and unhappiness, so it was refreshing to read about protagonists with such extensive support networks. But the list of things I enjoyed about Intersection unfortunately ends here.

One of my key issues was the writing. At its best points, the prose is nondescript. At its worst, it’s distractingly poor. The novel would have benefited greatly from more editing. It could have been about a hundred pages shorter. There are a number of typos. Healy sometimes reaches for other dialogue tags (directed, griped, grumbled, groaned, questioned…) in places where said would suffice, and actions are used incorrectly as dialogue tags.

There are also strange point of view switches. Healy divides chapters into multiple parts, with each part in a different character’s perspective. But she also jumps between points of view within the same part. In Chapter One, for example, there’s a place where one paragraph describes Alex, the very next paragraph describes Cassidy who is in a different location, and then the next jumps back to Alex. I wouldn’t have minded the point of view changes if they were consistent and made sense for the narrative. But they were jarring, and a serious detriment to the pacing.

Healy also made unusual choices about which scenes to describe in-depth. When Alex and Cassie first meet, we see all of their back-and-forth dialogue and movements in great detail. I wasn’t sure what it was adding to the plot or the development of their relationship. But when Alex takes Cassidy on long drive, the first extended alone time they have, Healy summarizes the majority of the conversation.  It would have made all the difference to see more of them talking and reacting to each other and actually falling in love.

This brings me to my second issue with Intersection. Alex and Cassidy’s relationship never drew me in. Almost immediately, Alex and Cassidy feel the electricity, but I didn’t understand what they find so compelling about one another. The relationship develops absurdly fast. By the sixth of twenty-eight chapters, less than a week in book time, Cassidy already knows “she could never walk away from Alex Toles.” I was like, Cassy you have a son! What are you thinking? The speed with which they decide they’ll be forever together is frankly terrifying. Although both characters acknowledge the extreme pace at which they’re moving every so often, they make no attempt to slow down. The rapidity of the relationship feels incompatible with Alex and Cassidy’s other priorities and how sensible and intelligent the two women otherwise act.

Alex and Cassidy spend a lot of time feeling overwhelmed with love for one another and professing their love, but the progression to that point didn’t work for me. And then there’s nowhere unexpected or interesting for the relationship to build to for the remainder of the book. The sex scenes are vague and a little dull, and I struggled not to skip them. There are places that Cassie and Alex speak to each other in French (with the English translation in awkward brackets behind the French text) because…why not, I guess. Although I wanted to be invested in their relationship, I simply wasn’t.

I was also taken aback by how other characters react to Cassidy and Alex. Almost everyone they encounter quickly figures out, or already knows, that Alex and Cassidy are together, even though they haven’t told people. And every character is wildly in support, because it’s clear that “what they have is special,” or that they “love each other very much.” No one (other than Cassidy’s ex-husband, who is portrayed as a pretty selfish and terrible person) questions the pace, or the extent to which they intertwine their lives. I would have even been satisfied with a brief, “Hey, Cassidy, don’t you think your relationship with this FBI agent who’s supposed to be protecting you is moving a little fast?” from her mother, but Rose is just as thrilled as everyone else. Minor spoiler: if I was planning on moving in with someone after less than a month of knowing them, I’d hope that someone in my life would object.

My third issue is that Healy struggles to integrate the romance and thriller plots. Although Cassidy’s life is in danger, the threat is frequently tabled for an entire chapter in favor of developing her romance with Alex. Additionally, the antagonists are introduced in short, vague scenes throughout the book before they finally clash with Alex and Cassidy. Although I’ve seen this work to terrifying effect in some thrillers, with Intersection I felt I was waiting for things I’d already anticipated to go down, since I had so much information about the situation than the characters.

The thriller plot also splits into two distinct issues towards the end. One of them is resolved. The other is not at all, which I found highly dissatisfying. The book ends on an explosive scene that I think is supposed to make readers want to buy the sequel (and the e-book version does, in fact, include the first chapter of the second book), but I don’t feel inclined to.

I can’t in good faith recommend Intersection, but it certainly made me want to read other more satisfying lesbian thrillers.