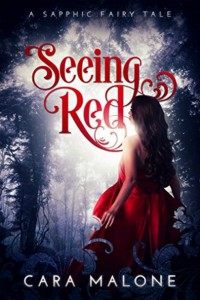 Seeing Red is a cute and quick read with a sweet romance and really well-written characters. It’s loosely based on the fairy tale and I absolutely enjoyed this modern take with relatable characters.

Hunter has too much on her plate. She’s living with her sister, Piper and helping with the bills and her two nephews. She’s balancing a job in a care facility while also trying to keep Piper away from her jailed criminal husband, Jed Wolfe. Although things are really desperate, Hunter tries to show Piper that there’s a good life away from pulling cons. Meanwhile, wealthy college student Kiera has just moved in with her grandmother who’s been diagnosed with Alzheimer’s. Kiera isn’t only taking care of her grandmother but also hiding after an embarrassing encounter at her sorority house. A chance meeting brings Kiera and Hunter together. Kiera needs help with her grandmother and Hunter becomes the old woman’s caretaker. The pay is great, Kiera’s grandmother really likes Hunter and her family, and…there’s something magical happening between Hunter and Kiera. Maybe, Hunter can finally slow down. However, Jed still has his claws in Piper and her desperation to provide for her family will have consequences for all.

The split perspective between Kiera and Hunter with an occasional chapter from Piper really works because the characters have such distinct voices. Malone deftly avoids stereotypes and creates characters that are wonderfully written and relatable. Kiera and Hunter are great protagonists who are brave, interesting, and very real. They are so well-written that I was totally invested in them individually even before their romance blossoms. However, I would have liked more development on Hunter’s history, and Jed’s presence needed to be more ominous because he doesn’t seem like that much of a threat.

The romance between Kiera and Hunter is gentle, sweet, and natural. Despite the fairy tale romance, I like that Malone avoids leaning on classic tropes. She examines real issues like manipulative relationships, financial struggles, and Alzheimer’s. There are many instances that could have been melodramatic but Malone excellently handles her plot and characters to avoid unnecessary drama.

Cara Malone’s Seeing Red is a lovely read. The characters are really well-written, the romance is cute and the happy ever after perfectly fits. If you’re looking for an adorable lesbian romance that’s loosely inspired by a fairy tale, you won’t be disappointed!