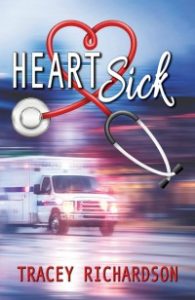 Heartsick is a pretty good read with a decent slow-build romance between an ER physician and a paramedic. While I do like this book and I recommend it, I would have really loved this book if it had slightly better characterization and writing.

The book switches perspectives between our two protagonists, Angie Cullen, a former soldier now paramedic and Dr. Victoria Turner, an ER physician. I do like the idea of having two different perspectives in one book. However, I really would have liked to see their voices be much more distinct because sometimes, they blend into each other.

The main characters are brought together by a car crash which reveals their partners’ infidelity. Angie’s long-time girlfriend Brooke is cheating on her with Vic’s wife Karen. Soon after the crash, Brooke and Karen move in with each other. Angie and Vic are left to pick up the pieces of their lives and try to move on. The two women become friends as they rely on each other to figure out this difficult time in their lives. Their relationship blossoms into a romance that has some cute and steamy moments but also has setbacks like the huge dilemma of getting back into a serious relationship so quickly.

I really like how realistically Richardson handles the theme of infidelity. Both Angie’s and Vic’s reactions to their cheating partners are well-written and really makes you feel their pain. Moreover, their responses are extremely plausible. While there are a few instances which could have been cliché like Karen attempting to get back together with Vic as well as Angie’s repeated near-death experiences, Richardson maturely confronts these situations which actually do contribute to the plot.

However, I really did not enjoy the prolonged “will they or won’t they” relationship drama between Angie and Vic. I do like that both women are hesitant to get back into a serious relationship so soon after such devastating heartbreak and I believe that, at first, their indecision makes complete sense. But, the unnecessary drama draws out for far too long. Furthermore, the constant changes in their attitudes are confusing. One moment, Angie will be ready to take the plunge while Vic won’t…but, only a few pages later, Vic will be ready and Angie won’t.

I really love Angie who has a heart of gold and is sweet and loyal. However, I feel like I don’t know as much about Vic as I do about Angie. Therefore, I cannot connect with Vic in the same way that I do with Angie. I would have really liked to see some more character development for Vic because she is a great character, but I wish she was a little more fleshed out.

Tracey Richardson’s Heartsick is a good and quick read. Although I wish the writing and characterization could have been a little better, this is a solid book. If you like medical romances, some angst, and happy endings, I don’t think you’ll be disappointed.