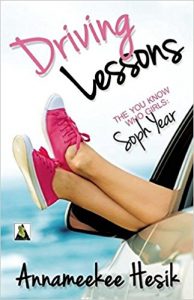 Annameekee Hesik’s 2014 Driving Lessons is a cute and quick but also meaningful read. The novel follows teenager Abbey Brooks as she attempts to navigate her sophomore year at Gila High. Abbey’s journey is relatable, funny, and touching as she tries to get her driver’s license, survive high school, navigate the basketball court, come out to her mom, juggle friendship drama and relationship troubles as she tries to find a girlfriend. This book is a sequel and continues with characters who have already been introduced in a previous novel. I had no idea that this book was a sequel until I was already well into reading it. However, Hesik does a good job of ensuring that new readers can easily understand the characters’ history and this book can be read as a standalone.

Abbey is an extremely relatable character. But her actions can sometimes be frustrating. She is unfailing loyal to her unreliable and self-centred straight best friend, Kate, and she also has a penchant for keeping too many secrets. However, her reactions seem true to her character. The first-person narration is definitely faithful to that of a teenage girl. Abbey’s journey to fulfil her to-do list is a bumpy one filled with twists, turns, and several love interests. Things go disastrously wrong before they work out in time for a cute and happy ending which feels natural.

Although this book is definitely a Young Adult novel, its themes are applicable to readers of all ages and sexualities. Hesik examines the typical aspects associated with teenage life like sex, secret relationships, friendship troubles, and bullying. However, Hesik touches on other issues like dealing with the previous death of a parent (Abbey’s father died in a car accident and this ties in nicely with her reluctance to drive) as well as neglectful and homophobic parents. There are homophobic slurs as Abbey is bullied by classmate Nicky. However, their interactions take a surprising but organic turn (not quite what you may be thinking) as the book progresses. It is also refreshing that the characters are almost exclusively female and there is an abundance of lesbian characters with a few bisexual characters sprinkled in. However, the treatment of bisexual characters could have been handled better.

Abbey’s friends are a major part of the novel. They include ‘veteran’ you-know-who girls (cutesy code for lesbians which is somewhat endearing only because it is used so sparingly) like Tai, Mia, and Garrett (who is actually bisexual). These girls are well-written and seem very real as they support Abbey but they can also be secretive and self-serving. Abbey’s friendship with Kate is particularly relatable and the slow deterioration of their friendship is well-done. One of Abbey’s love interests, Devin, is deaf and her presence adds a nice touch of diversity to the novel. However, I would have liked to see some more characters of colour.

One of my favourite parts of this book is Abbey’s sweet and genuine relationship with her mom. Abbey’s mom is supportive while still being a very realistic parent. While Abbey’s eventual coming out is somewhat disastrous, her mom’s reaction is wonderful and it is great to read a novel where the protagonist’s mother is so openly understanding of not only her daughter’s identity but is also accommodating to her friends.

However, while many of the characters are well-crafted and memorable, there are too many of them. Therefore, there are too many side-plots that sometimes end abruptly or lack resolution. Kate’s drama with her partying and boyfriends overstays its welcome and Abbey’s mother’s return to dating are just two instances of too many plotlines in an already full book.

Annameekee Hesik’s Driving Lessons is a great and quick read. There is a lot going on in terms of plot and characters but, for the most part, Hesik handles the action well. I enjoyed this book and I look forward to more of Abbey’s adventures. If you’re looking for an easy but still meaningful read which features an almost exclusively female and lesbian cast of characters and a sweet and happy ending, you should definitely check out Driving Lessons.