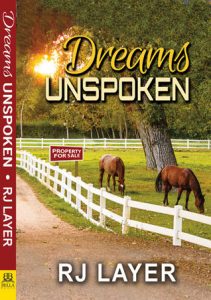 R.J. Layer’s Dreams Unspoken is an okay read with a dull and dragging plot and the slowest burning romance ever.

The book features two very different protagonists. We have rugged lesbian cowgirl Jo Marchal who has moved back home to be near to her dying father. Her parents do not accept her sexuality and after years of strife, Jo is hoping to fix their relationship before it’s too late. Our second protagonist is real estate agent Maria West who helps Jo find a new place. Maria is stuck in a loveless marriage and she adores her autistic son, Matt. The two women form a deep friendship, looking out for one another through traumatic events and new changes.

Both Maria and Jo are inconsistent characters. I wish they had been better developed. However, I do like them. Jo’s strength and kindness make her memorable and Maria is sweet and giving. The plot just bogs them down. Maria desires Jo from early on but she spends most of the book declaring how straight she is. She also pushes Jo towards romance while being jealous about Jo’s interactions with other lesbians. Jo also pines for Maria but gets involved in an ill-advised relationship with abusive deputy sheriff Kate. She also pursues other women. However, she still longs for Maria while pushing away these women. The flip-flopping in characterization is frustrating and repetitive.

While a slow burn romance does make sense, the book proceeds at a snooze worthy pace. When the actual romance finally happens at the bitter end of the book, it is very anticlimactic. I really would have preferred if Maria and Jo didn’t end up together because while they do have a connection, I could never fully buy them together and I think they may have been better off as friends.

I also like the book’s diversity: Maria is Hispanic, and her son is autistic. I do like the characters’ separate storylines. However, the book has many instances which could have been better developed to solidify the plot but Layer often ends up dropping matters quickly. I really wanted to see more of Jo’s reconciliation with her parents or her relationship with Matt. I also would have liked to see Maria dealing with her dissolving marriage as well how she copes with a new baby in the midst of these changes. Additionally, I wish Layer would have meaningfully addressed Jo’s alcoholism and Kate’s abuse of her.

R.J. Layer’s Dreams Unspoken isn’t the worst book I’ve read, but it has too much wasted potential. Although I like the main characters, the characterization is inconsistent and the plot never really takes off. I definitely would not read this one again.