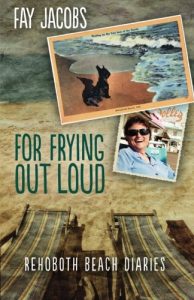 Fay Jacobs’ 2010 For Frying Out Loud: Rehoboth Beach Diaries is a hilarious, relatable and wonderfully quick read. The book is a collection of Jacobs’ columns from 2007 to 2010. Through these witty and concise columns, readers follow Jacobs’ life with her partner, Bonnie, and their ever-present Schnauzers in Rehoboth Beach, a small town in Delaware. Her writing also chronicles her travels throughout North America. There is also a healthy dose of political and social commentary as she examines some of the major events which occurred from 2007 to 2010, commenting on everything from the overzealous Vuvuzela trend to acerbically confronting General Peter Pace’s homophobic remarks about gay people in the military.

This book is undoubtedly of gay interest as Jacobs is an out and proud lesbian and she faithfully incorporates this part of her identity into almost every column. She also explores the big issues affecting the community like gay marriage, gay rights, and gay culture. She educates readers on aspects of gay history as she writes about important figures of the American LGBT movement like the late Barbara Gittings. She even dedicates a column to the Equality march. Her writings on these serious topics are not didactic or severe. Instead, with her signature brand of humour and casual writing style, Jacobs imbues her stories with empathy and personality while also educating readers on gay history. She honours the achievements of these departed pioneers and recounts her personal memories associated with these women. She also notes her own experiences at Equality marches, reminding readers of the sombre nature and history of these events but, at the same time, her writing is optimistic while also being appropriately and tastefully humorous.

Jacobs’ columns strike an even balance between the important and the ordinary as she also finds humour aplenty in chronicling everyday life. Her writings are chock-full of laugh-out-loud incidents. Her road trip mishap with the “bitch on the dashboard” (also known as the GPS Navigation System) who may or may not be out to get her and a cat meowing happy birthday to her over the phone are just some of her life stories which are too funny to be missed. The diverse range of subjects that she explores ensures that readers will always find something to relate to. Jacobs’ writing style is light and conversational, making her columns an easy read. Her language is simple and personal, deftly drawing readers into the madness that is her life. Most importantly, Jacobs exhibits a refreshing brand of humour which neatly avoids being mean-spirited or rude but which is good-naturedly funny and sincere.

For Frying Out Loud: Rehoboth Beach Diaries is divided into four sections with each division dedicated to a year’s worth of columns. Some of Jacobs’ more interesting 2007 columns focus on the culture of Rehoboth Beach (apparently, there’s an infamous Delaware State Fair Duck Drop), the difficulties of travel in a post 9/11 America, gay culture, and the struggle for equality for gay people. Notable highlights from her 2008 columns include numerous travel adventures like a memorable all-gay women cruise (which was as fantastic as it sounds) and Jacobs’ attempts at interacting with social media. 2009 finds Jacobs hilariously navigating Wii and Twitter and her misadventures in puppysitting. She even dedicates an informative segment to the fascinating and lengthy gay history of Rehoboth Beach. The book’s final section encompasses Jacobs’ 2010 columns. Some of these more memorable moments include Jacobs and the family being snowed in, a DIY home improvement project gone disastrously wrong and several RV trips filled with food, adventure, and a lot of laughs.

Fay Jacobs’ 2010 book For Frying Out Loud: Rehoboth Beach Diaries is a light and funny read. Although Jacobs’ earlier columns were written a decade ago and it may be tempting to see them as outdated, her writing is relatable and extremely applicable as many of the issues that she addresses have not gone away. Jacobs explores important LGBT issues and examines aspects of gay history while also finding the humour in everyday life. Her witty and unique sense of humour ensures that her columns are delightful reads. This book is perfect for readers who want to be both educated and entertained while enjoying an easy and good-naturedly funny read.