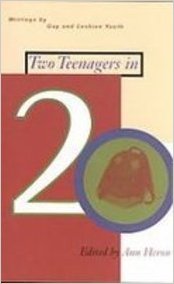 Coming out and living as a gay or lesbian teenager can be hard. Or it can be liberating. Everyone’s stories are all different, and Two Teenagers in Twenty, a compilation of true coming-out stories by homosexual teenagers, touches on all the emotions. From acceptance and understanding to fear and disgust, this book is a must-read for any gay, bisexual, or lesbian teen.

Published in 1994 as a sequel to One Teenager in Ten, both edited by Ann Heron, Two Teenagers in Twenty was made to show the lives of coming-out teens and the reactions of their families and friends. Though outdated (the stories in the book range from the 1980s-1990s), the hardships and fears young gays and lesbians face still resonates deeply today. The youth in these stories are between twelve and twenty-four years old, but each of them had to deal with realizing their sexuality, coming to terms with it despite society’s negative portrayal, and telling their loved ones.

This book accurately showed how different each individual’s story was. You get to know the plight of Joanne, a young woman raised by her parents and her school to believe homosexuality is wrong; Jim, whose mother and father react badly to his being gay; Robin, a girl exposed to only negativity about gays and must come to terms with herself; and Jennifer, a bisexual woman into gay rights activism. Though some stories are short, the authors clearly describe their troubles and their triumphs. You get to know each person, and you cheer them on or grieve for their problems and sadness.

The stories these brave teens tell can be shocking and, at times, appalling, making you disgusted with homophobes and bigots. Some kids here have dealt with being picked on at school, beaten up, rejected by their parents, isolation, and suicidal thoughts and attempts. Tragically, one young lesbian girl who shared her story in this book succeeded in ending her life. Suicide was and still is a huge problem for gay teens because of the lack of understanding and the hatred directed at them.

A lot of the stories do offer hope. Some parents featured in Two Teenagers in Twenty were accepting of their children, and even marched with them in Gay Pride parades. Some teens were able to find resources and books that showed homosexuality in a positive light, and some were able to meet other teenagers like them. And many of the teens were combating homophobia and trying to raise awareness for gay rights. Some good things have happened for gay rights since this book came out, but there is still a lot to do.

Two Teenagers in Twenty provided homosexual teenagers with people their age to relate to, hope for their futures, and also provided some good resources. At the back of the book are lists of fiction and non-fiction books for gays and lesbians. Granted, some are very old now, but that doesn’t take away the enjoyment of them. As for Two Teenagers in Twenty itself, it’s a wonderful book that still has potential to help gay and lesbian teens and young adults who are coming out to themselves or their loved ones. It’s touching, thought-provoking, and ultimately, hopeful.