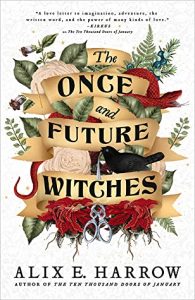 Since reading Alix E. Harrow’s The Ten Thousand Doors of January last summer, I have been anxiously awaiting the publication of The Once and Future Witches. I finally got to read it over the holidays at the end of last year, and it did not disappoint!

Set in an alternate history, Harrow’s novel begins in the 1890s, in a city called New Salem, where witches have been eradicated. The early burnings of witches—presented as a genocidal project that was inevitably gendered—served to almost snuff out women’s magic from the world. Stories, traditions, and spells passed from grandmother to mother to daughter have been nearly wiped from existence. Or, in the case of some characters, these spells have simply gone underground. The Once and Future Witches merges the very real suffrage movements from the end of the nineteenth century with the fantastic, and women’s political and magical powers are interestingly blended.

The novel focuses on the Eastwood sisters: James Juniper, Agnes Amaranth, and Beatrice Belladonna. Torn apart by betrayals and complex traumas, the sisters reunite in New Salem and spark a women’s/witches’ movement. However, there are dark forces that would seek to rob women of their words and ways and keep these women in their subjected position. The three sisters, along with all those women who support them, must work to overcome these forces in order to bring witching back into the world.

I loved this book. It is a fascinating product of historical/fantastical fiction that really works. Harrow is able to braid these fictional/non-fictional elements together in such a way as to truly craft an alternate history that feels very empowering for a modern reader. I adore Harrow’s writing, and have since The Ten Thousand Doors of January, but I think this book truly packs more of a punch in terms of its plot and characters. Each main character in this book is a delight to read, and they have such distinct and magnetic personalities that work so well throughout the book. Harrow has clearly done her research here both in terms of historical accuracy and fairy tale tropes. The twists never stop with this novel, and I highly recommend it.

Not to mention—it’s queer! Harrow’s lesbian characters, a pairing which includes a BIPOC woman, have that particular brand of historical lesbianism that I am unashamedly drawn to (think lots of long looks and hand touching). Harrow’s novel is an intersectional one, and she includes queer people and people of colour in this discussion of rights, oppression, and female history. I couldn’t recommend this book more, and I can’t wait to read Harrow’s next novel!

Please visit Alix E. Harrow on Twitter or on her Website, and put The Once and Future Witches on your TBR on Goodreads.

Rachel Friars is a creative writer and academic living in Canada, dividing her time between Ontario and New Brunswick. When she’s not writing short fiction, she’s reading every lesbian novel she can find. Rachel holds two degrees in English literature and is currently pursuing a PhD in nineteenth-century lesbian literature and history.