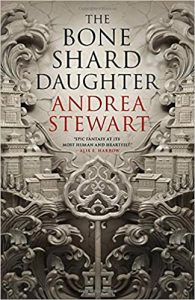 Intense, expansive, and original, Andrea Stewart’s The Bone Shard Daughter (2020), book one of the Drowning Empire, was a joy to read. Its lesbian representation offers a fresh refocusing of queer desire. It’s perfect for fans of Gideon the Ninth (2019).

Stewart’s novel follows multiple perspectives as she sets up the Bone Shard world. The empire is ruled by an emperor who clings tightly to his reign. As a master of bone shard magic, which controls animal-like constructs that spy, make war, or play politician, the emperor has an iron-like grip on his people, all of whom are required to contribute a shard of bone in order to power the constructs. This is a contribution that will eventually drain their life force prematurely.

But conspiracy and sabotage lurk in the shadows. In spite of his power, there are those that would see the emperor and his regime fall—including his daughter, Lin. Through different characters scattered across the landscape of this world, Stewart begins to set up the key earth-shaking influences that will reshape the world that the characters know.

This book was incredibly fun and thoroughly detailed. I appreciated the slow and careful world building that Stewart was careful to include. Furthermore, I was grateful that Stewart’s empire included an environment where queerness was not only accepted, but hardly thought of. The relationship between Phalue, a governor’s daughter, and Ranami, a member of the resistance, is original in many ways. For this novel and its characters, lesbianism is not a plot point, but rather an incidental aspect. The tension between them arises from their differing beliefs, rather than any fears or tensions related to their sexualities. This kind of representation is refreshing and necessary, and it fit as a whole with the book.

These characters and their tropes worked well together—the warrior lesbian who is only soft with her girlfriend is positively delightful and something I look for in lesbian novels. While this pairing was exciting, it was also complex, and I’m honestly hopeful that there’s more for Phalue in the next installment in this series. One of my pet peeves in fiction that features lesbian characters is moments sacrifice lesbian complexity in favour of moving the plot forward. One of these moments happens early in the novel when we meet the lesbian characters. While the lesbian representation Stewart’s novel works wonderfully for the most part, I’d love to see more active and complex relationships at work in the novel, in addition to the fascinating plot.

Nevertheless, I highly recommend this book if you love fantasy, normalized queerness, and great writing. I couldn’t be happier that I read this and I am excited to pick up the next installment.

Please visit Andrea Stewart on Twitter or on her Website, and put The Bone Shard Daughter on your TBR on Goodreads.

Rachel Friars is a creative writer and academic living in Canada, dividing her time between Ontario and New Brunswick. When she’s not writing short fiction, she’s reading every lesbian novel she can find. Rachel holds two degrees in English literature and is currently pursuing a PhD in nineteenth-century lesbian literature and history.