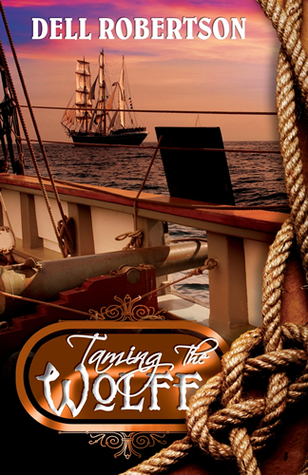 In this debut novel by Del Robertson, Taming The Wolff is a story of piracy, adventure, and love. Kris Wolff is a female pirate captain of The Wolfsbane who hides her true gender from most of her crew. She is aloof and reveals little about her past. She abducts a duchess and her two daughters for ransom. Alexis DeVale, one of the daughters, had been bound for an arranged marriage and now is captive on The Wolfsbane. She, like most others, believes Captain Wolff to be male. Kris protects her hostages from prying eyes, and though she and Alexis butt heads at first, an attraction between them is undeniable. Alexis soon discovers Kris’s secret, and wrestles with the idea of loving another woman. Meanwhile, The Wolfsbane is pursued relentlessly by naval officer Captain Jackson, who will stoop to torture and murder to obtain Kris. And during all this, Kris and Alexis must decide if they can have a future together.

Taming The Wolff gives readers insight to how being gay would be perceived in 1703, the year this book takes place. While Kris sees no problem with loving another woman, Alexis does. She was brought up in her family, society, and her church to think homosexuality was a sin. As a result, she has a hard time trying to reconcile her love for Kris. But that was a real factor back then; and still is today.

The characters of Kris and Alexis were complicated. I liked both women, but sometimes I found myself angry with them. I will not spoil the plot, but at one point, Alexis makes a sudden decision that to me seemed tacked in to the story. The explanation she gives for her action was rather unsatisfying, and I was thinking there had to be some better reason than what she was saying. When that turned out to not be the case, I was disappointed with the unexpected shift in the storyline. Also, Kris and Alexis had their arguments, like every couple. But some of the arguments seemed forced and interrupted the plot a bit. But maybe the purpose was to show how the two women were dealing with coming from two vastly different worlds and beliefs.

Those issues aside, the book had some good battle sequences and love scenes. Robertson accurately depicted the dangerous life of a pirate. There were many tense moments that had me wondering what would happen next. There were also enough twists and unexpected events to keep me reading on.

Taming The Wolff is a good book for those looking for adventure and surprises. Though not my absolute favorite, it can still be interesting and suspenseful.