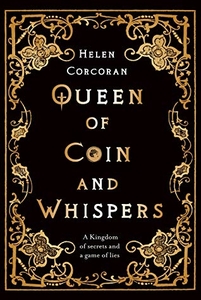 A lesbian fantasy with intrigue, murder, spymasters, and royal obligations? I’m in from the word go.

Helen Corcoran’s Irish fantasy novel, Queen of Coin and Whispers was published in June of 2020 by The Obrien Press after a short delay related to the COVID-19 crisis. But it was sincerely worth the wait. I think fantasy as a genre lends itself well to queerness in all its forms. Worlds that don’t necessarily answer to our own societal prejudices or pressures can be extremely freeing if done correctly. I’m thinking particularly here of something like The Priory of the Orange Tree (2019) by Samantha Shannon, which Corcoran’s novel follows nicely in the same vein.

Queen of Coin and Whispers follows Lia and Xania in a dual POV narrative. Lia is a princess who rather abruptly inherits the throne from her uncle, a ruler who remained distant from his duty and his people, content to let others make decisions for him as long as his goblet remained full. With his death, the kingdom teeters on upheaval, and Lia is determined to wrest power back from the conniving forces than commanded it under the nose of her uncle and to make real change as a ruler. Xania, the eldest daughter of a lower caste family whose mother has married up in order to secure financial safety for Xania and her sister, lives each day dreaming of finding the suspected murderer of her father and exacting vengeance. When she stumbles—literally—upon the queen and her council, a series of events ensue that lead Lia to hire Xania as her Master of Whispers. Now the queen’s eyes and ears everywhere, Xania attempts to protect her majesty while also searching for her father’s killer. However, an already complicated network of power is further entangled when issues of power, duty, and love intersect for both young women in this excellent fantasy.

This book was so, so fun. I found myself deeply intrigued by both the characters and the world around them from the opening of the novel. I found this fantasy to be very character-driven, differing from the usual world-driven novels I often encounter in this genre. Lia and Xania’s personalities and the choices they make are what drive this novel forward, and their distinct character traits really shine through. Lia’s introspective and powerful voice despite her young age are indicative of a queen’s commanding presence, something that Corcoran subtly includes. By contrast, Xania’s fierce and unparalleled passion for her family, her job, and Lia is thrilling to read.

While this novel may focus on character, in my opinion, the plot is not lacking. The intrigue and drama of a royal court provides an excellent backdrop for the violence, espionage, and trickery that constitutes some of the most exciting twists and turns in this novel. Corcoran pulls no punches and hedges no bets—anyone and everyone could be holding a knife to your favourite character’s back at any moment.

There are a number of social, political, and moral quandaries in this court that contribute to Corcoran’s world building. What is not an issue on its face, however, is queerness—it’s lovely to read a fantasy novel where not only are queer people accepted for who they are, but they’re also everywhere in this text, containing the various and rich elements of character that we might expect from any other fantasy novel.

Overall, I loved this book. My only issue would be that the pacing—especially toward the end of the novel—felt a bit off, and that the text could have slowed down just a but in order to convey the urgency of the last few pages at the same time that the world beyond the court could have been explored a bit more. Nevertheless, this was phenomenal, and if you’re looking for a fun and delightfully well-written lesbian fantasy novel, Queen of Coin and Whispers is entirely the perfect choice.

Please visit Helen Corcoran on Twitter or on her Website, and put Queen of Coin and Whispers on your TBR on Goodreads.