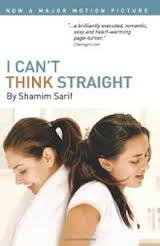 Different cultures are explored, and two different women come together in I Can’t Think Straight by Shamim Sarif, the director of the movie of the same name. Going back and forth from Amman, Jordan to London, the lives of two young women trying to make their mark on the world entwine in a funny, poetic, and tender story.

In Jordan, Tala, a Christian Arab woman from a wealthy and prominent family is due to be married to her fourth fiancée. An independent person, Tala is struggling to run her own business, and at the same time be happy with her husband-to-be, Hani. But she has a secret; a reason she broke off her first three engagements and is trying to ignore completely: she is attracted to women.

In England, shy Leyla, an Indian Muslim and a budding writer, is dating Tala’s best friend but is beginning to come to terms with her lesbian identity…though her boyfriend and family know nothing of it. When her boyfriend Ali invites Leyla to visit Tala (whose family also owns a place in London), their differences clash and they are somewhat tense with each other. But after a while, the women become good friends and encourage each other to pursue their dreams. Soon an undeniable and intense attraction forms between them, leading to a night of passion and pure love. The following day, however, Tala’s feeling obligated to go through with her wedding breaks the relationship, leaving her and Leyla lost and alone.

Tala cannot get Leyla out of her mind, and Leyla is bitter about the breakup. They both must face telling their families, even though they risk ostracism and prejudice. As they begin to come out, Leyla and Tala slowly work towards building their relationship. But can Tala call off her wedding?

I Can’t Think Straight has an interesting (and funny) cast of characters: from Leyla’s smart-remark sister Yasmin, to the kind and silly housekeeper in Tala’s household, Rani. Each character has their traits, like Hani’s kindness and gentle demeanor, and Tala’s youngest sister Zina’s vegetarian crusade. Some characters are either lukewarm or completely unlikable. Tala’s mother Reema is a prejudiced, anti-Semitic social climber who only cares about what her children’s actions will do for her family’s name. Still, most of the characters are good and have close friendships with each other.

The love story between Tala and Leyla is tender, with them respecting the other. They have their moments of doubt and fear; mainly due to coming out to their families. And their fears are very real. The reactions of their families and friends range from despair over why their daughters are gay, anger at the bombshell being dropped on them and their world, to helpfulness and acceptance. Tala is especially worried of the impact her being a lesbian will have on her family and their status in Jordan. Out of the two women, Tala is the most reluctant to make her sexuality known. She must gather her courage to take that step.

Sarif’s novel really hits home how being gay can be received by different cultures, and how family and friends will take it. There were also humorous moments in the story, such as Rani spitting in Reema’s drink and some of the witty dialogue exchanged between the characters. I Can’t Think Straight may not be some people’s cup of tea, but the story, with the diverse and well-fleshed out characters and the rewarding ending, make this an entertaining read.