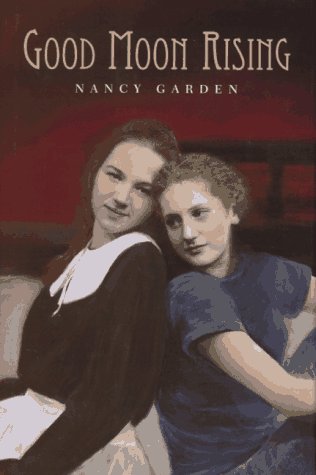 While most fans of lesbian literature will recognize Nancy Garden for her classic romance Annie on my Mind, there are still plenty of other books she has written that young lesbians can relate to. Good Moon Rising is one of them. It has a combination of lesbian lovers, theatre and acting, and intolerance and ignorance of homosexuality.

Seventeen year old Jan Montcrief, a budding young stage actress, returns to her school after a pleasant time at a summer acting program. The theatre coach, Mrs. Nicholson, is putting on The Crucible, a play about the Salem Witch Trials, and Jan auditions for the female lead, Elizabeth Proctor. She is soon shocked to learn that she will not be playing Elizabeth; she will be a stage manager. The new girl, Kerry Ann Socrides has gotten Jan’s part. At first upset, Jan grows to enjoy her new role, and to befriend Kerry as they work on Crucible together. Soon, Mrs. Nicholson is in poor health, and Jan must take over as director. She and Kerry fall deeply in love, which their classmates pick up on pretty fast. And some are determined to use that against the girls.

Good Moon Rising does a wonderful job with the characters, making Jan and Kerry likeable. Also Jan’s wondering “Am I gay?” will strongly resonate with any lesbian doing her own soul-searching. The supporting characters add to the story. Ted, Jan’s lifelong best friend, has his own feelings for Jan that complicate their friendship. Kerry’s eccentric and silly Aunt Elena provides some laughs, though she has her reservations about homosexuality. Perhaps the most conflicted and prejudiced character is Kent, a classmate playing John Proctor. He is openly gay-bashing and always trying to prove himself as a “real” man. But Jan soon suspects that Kent is hiding his own homosexuality. It’s ironic; Kent, a homosexual himself, actually does the most bullying in the book.

The prejudice Jan and Kerry face parallel to the hysteria and ignorance of those who participated in the Salem Witch Trials. All over school, signs saying “I saw Jan Montcrief with the devil, I saw Kerry Socrides with the devil” are posted, sounding like the lines used in The Crucible. Kerry and Jan are thrown Bible quotes alongside threats and prank phone calls. Their classmates are going out of their way to ruin the two girls and break them apart; all because of their own fears and hatreds, much like Crucible and the Salem trials.

Good Moon Rising, compared with Annie on my Mind, is somewhat darker in tone, as the prejudice the girls face is bolder, and Jan must come to terms with Mrs. Nicholson’s terminal illness and eventual death. The book has a few sadder scenes, and Jan and Kerry are dealt a lot of homophobic blows. For a while, things between them are uncertain. And the story is set in late fall, giving a dreary atmosphere.

But there is still hope for Jan and Kerry. With help from Jan’s gay friend Raphael, the girls begin to come out and take braver steps in telling their families and remaining together. Though some questions are left unanswered, Good Moon Rising ends on a happy note. Jan and Kerry’s love for each other seems stronger, and both feel more comfortable as lesbians. And they do have the support of friends to pull them through. While Good Moon Rising is a more somber read, it is a masterpiece in its own right, and should be remembered as one of Nancy Garden’s best novels.