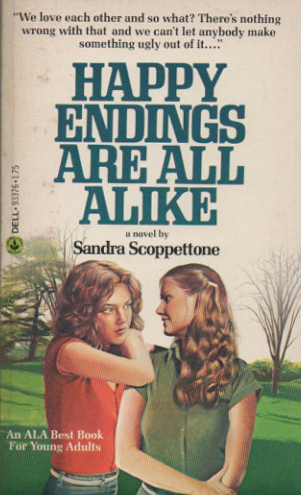 In 1978, a lesbian novel was published by Sandra Scoppettone, called Happy Endings Are All Alike. Though it’s almost four decades later, the book still hits home the prejudices, sexism, and hatred against gays and lesbians, and the plight of gays was just being acknowledged to the nation.

In Gardener’s Point, a small narrow-minded town, Jaret Tyler is enjoying her summer before going to college. She is also in the midst of a love affair with former classmate, Peggy Danziger. The two are happy with each other and their relationship, but are only out to a few people; like Kay, Jaret’s feminist mother, and Bianca, their friend who introduced them. They know that, if their affair were to be found out, they would face major prejudice. And when one bitter, angry young man learns of their secret, he uses it as an excuse to brutally violate Jaret, turning the girl’s worlds upside down.

Happy Endings has amazingly real characters. Nobody is perfect. Jaret and Peggy have their troubles, like any couple, and the supporting characters, like Jaret’s parents and moody brother, bring out a real touch to the novel. Some characters are funny and likeable, while others are downright revolting. Bianca is very eccentric, dramatic, and over the top hilarious. Peggy’s older sister, Claire, feels ugly compared to Peggy and as a result has deep bitterness, insecurity, and spite. She detests homosexuality, and uses Peggy’s secret to hold over her. Then there is Jaret’s detestable attacker.

Jaret and her mother are very into women’s rights, and they do deal with sexism. One case was when Jaret was being interviewed after the attack by Chief Foster. He bluntly implied that she was to be blamed for the beating and the rape, and not “the poor boy.” Though father of a girl himself, Foster asks Jaret mean questions about the attack, and when he learns she is a lesbian, he suggests the parents don’t press charges.

Happy Endings is a good book that shows how bad homophobia and sexism can get, but I would only recommend it for mature readers. The scene where Jaret is raped is highly disturbing and her treatment by her attacker and Foster will make any reader furious. The book is good to read about the gay movement in the 70s, but for a gay person coming out, it may be too heavy.

Happy Endings, though very dark, is not like the earlier doomsday lesbian novels. There are still unanswered questions at the end, like how the attacker’s trial goes, but Jaret is determined to punish him. And though for a while it looks like Jaret and Peggy can’t work out their relationship, in the last scene they reconcile and it’s strongly hinted that they will find a way to be together. “Happy Endings Are All Alike” is one of the first lesbian novels that offer hope at the end, and for that and its realistic story, I recommend it.