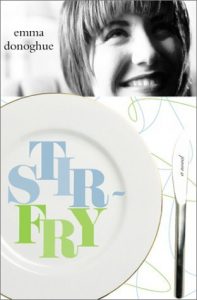 Trigger Warning: this novel depicts sexual harassment of underage people by an adult, discussed in this review’s fourth paragraph.

Stir-Fry is an impressive debut novel, presenting a very relatable and thoughtful protagonist in Maria while also rejecting several tropes usually found in contemporary young adult novels written in the last half century. The novel takes place at the start of 17-year-old Maria’s first semester at university in Dublin after moving from her family’s home in a small village. Maria is dissatisfied living with a conservative, dull aunt in the city and answers an ad from two women seeking a flatmate, finding herself invited to dinner with 20-something students Jael and Ruth. Jael is extroverted, directionless and equal parts obnoxious and charismatic, while Ruth is a reserved but passionate feminist activist, and Maria quickly becomes close to them both after she moves in and naively doesn’t question why Ruth and Jael would share a room and a bed.

For those readers who aren’t aware of how conservative 1980s Ireland was (and the novel never explicitly explains this), it may seem a little far-fetched that Maria wouldn’t twig that her flatmates are lesbians in a relationship, but with the context of a poor, Catholic, isolated country it is distinctly plausible. This context also indicates why Maria would never have questioned her own sexuality before. The author’s presumption of reader knowledge here might make the novel feel a little inaccessible to some audiences at first, but the excellent descriptions of life in Ireland at the time paint a picture of a place where people might be pushed to be so oblivious to their own and others’ divergent sexualities. Maria’s pedestrian conversations with her classmate Yvonne–a friend Maria knows she should have but often struggles to tolerate–provide stark contrast to the vibrant, unpredictable interactions she has with her housemates, and Maria and Ruth both show miserable but resigned commitment to visiting bland family members even when the older people’s narrow ideas about life clash with the young students’ rapidly expanding intellectual worlds. The book makes it easy to empathise with Maria’s constantly changing understandings of who she is, and of the people around her, as the novel goes on and the reader sees her experiences diversify even further.

Stir-fry often feels as fractured as memory with scenes ending at ambiguous moments and skewed indications of how much time has passed. There are frequent disjointed jumps between intense conversations on raining streets to calm lounge room scenes, and Maria seems to change and recognise so much within herself, as do Ruth and Jael, and the novel ultimately only covers three months. Almost no scene in the book ends in a definite or clear manner, with characters’ last lines often leaving the reader with more questions than answers about what they mean. The scene breaks and narrative ambiguity give Stir-fry an unconventional structure and force a different kind of reading to typical young adult coming-of-age novels where characters’ thoughts and feelings are generally more clearly stated. Analysing relationships and revelations within this text requires deep concentration and thoughtful interpretation which is unexpected and rewarding.

One major criticism of the text is that an adult character at least a decade older than Maria makes advances towards her while fully aware that Maria is still a teenager and very unsure of herself sexually and romantically. This would be somewhat redeemable if there was any sort of indication anywhere in the novel that this behaviour is wrong, but it is never implied to be anything more than misguided and insensitive. These scenes toward the last third of the book may be distressing or triggering for some readers, and are certainly a large flaw in an otherwise brave, interesting and creative work.