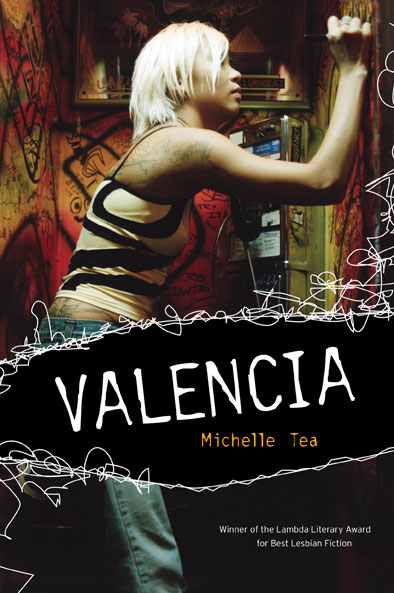 What to say about this book?  I can’t quite put my finger on Valencia, can’t pin it down or summarize my reaction to it.

Perhaps my first mistake was to read the introduction.  My copy is a reprint, with Tea adding commentary on her own ambivalent feelings regarding the semi-autobiographical story of being young, queer, drunk and high, in love, broken-hearted, hungover, penniless, jobless, restless, in San Francisco.  Starting the book with that strong sense of ambivalence may have colored my reading of it.

Each chapter in the novel is a new girl, or a new party, or a new job, told explicitly and graphically, in stream-of-consciousness style.  Sometimes the story blazes and sometimes it falters.  Sometimes it even dawdles and loses the thread completely.  By the end, it becomes quite lyrical and emotive, and I felt drawn to Tea’s narrator where she had annoyed and alienated previously.  But I was also angry!  Why was all this beauty confined to the very last chapter of the book?!

Published in 2000, I’m not sure the book has the same impact today.  Would it win awards or receive so much praise if written in 2011?  There have been quite a few “women-on-the-verge” confessional-style memoirs and stories since the late 90s/early 2000s — maybe this one stands out for being Capital-Q Queer?  But reading it, I was even reminded of books by Kerouac and Diane DiPrima.  In this sense, Tea’s explicitness when detailing all of the the sex, drugs, and aimlessness of her life, felt stale.

Or, maybe it’s me?  Maybe if I was younger and less settled in my life, Tea’s meanderings between girlfriends and emotional crises would have resonated more.  One thing I can say for Michelle Tea, I was not indifferent to her writing.

It took until page 164 for me to find a passage that I truly liked:

As long as I was able to keep my mind from my heart, it seemed like a pretty cool situation. Brave and exciting. But my heart was a whirling, starving void that sucked and sucked like a terrible black hole, and when it gobbled up my logic it made what I was doing look lonely, and sleazy. I laced my Docs and grabbed my leather jacket.