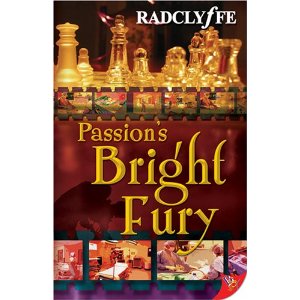 Trauma surgeon Saxon Sinclair does not want Jude Castle filming a documentary in her top-rated NYC trauma center.  Jude Castle does not want Bossy McBossersons Sinclair telling her a damn thing, ever. Both have emotional baggage and dark secrets to hide.

Radclyffe gets so many things right, I find her romance books  a joy to read.  Each character, for all the dark emotional turmoil, felt relatable in basic and fundamental ways.  The dialogue was natural, the humor sincere, and most importantly, the romance felt hot.

One thing that bothered me: narrative-interrupting inner voice.  Occasionally, the third person narration would veer into a character’s internal, first person voice for a sentence or two.  It wasn’t always super clear when this was happening, so there were a few passages I had to re-read in order to understand who the hell was talking and why.

A second issue I had was with the near tragic ending.  A book that is about the relationships between two people, their emotional struggles, etc. etc. does not need an explosive but OMG! saved-in-the-nick of time climax to get to that happy ending.  In fact, having characters realize the depth of their love simply because their beloved almost died?  I found it really obvious.

I really like how Radclyffe creates intelligent, emotional women— and that neither of these attributes takes anything away from the other. I also like they way she writes lesbian relationships.  Her books are realistic about being gay and out, while also telling a love story.  Passion’s Bright Fury showcases these talents.