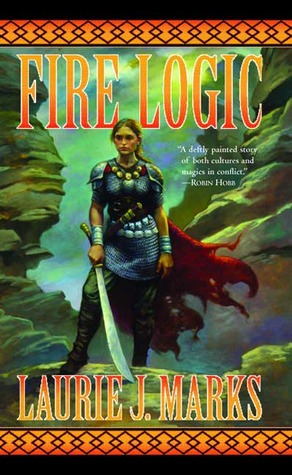 A friend recommended Fire Logic to me, partly because I am a long-time fantasy novel enthusiast, but also with the specific note that it is one of those “invisibly queer” books. By invisible, I do not mean closeted, repressed, or filled with subtext– instead, Fire Logic presents a world where queer characters are never explained; their lifestyles are never narrated as being capital-Q Queer, they just are. Characters never question their sexuality, defend it, or even really discuss it. Rigid gender roles do not exist either; a sword-fighter is as likely to be a woman as a man, and the same for farmers, metalsmiths, etc., and all with very little discussion or explanation. It is a refreshing and delightful thing, to encounter a world where subculture is ordinary, and magic is everyday.

Fire Logic is set in a country at war– the land of Shaftal, left bereft after the leader died without passing his magic onto an heir, was invaded by the ruthless Sainnites. For fifteen years, a guerilla army has been resisting the occupation, with decreasing success. The story is divided between three main characters, Zanja, the sole survivor of her tribe (although, thankfully, this is not a rape-revenge fantasy novel), Emil, a scholar forced back into soldiering by the occupation, and Karis, a metalsmith with a terrible drug addiction and even more powerful secrets. Warfare, politics, romance– Marks rather deftly weaves all together into a well-written story that is both thoughtful and interesting.

I will admit that the prose is, at time, strangely distant. I occasionally struggled to be emotionally engaged. The first third of the book is very slow, and so I had a hard time paying attention to the intricate details and politics. It does pick up, however, and I did become more engrossed– even if I was a little bit removed. Overall, I really liked it, and I look forward to continuing the series.