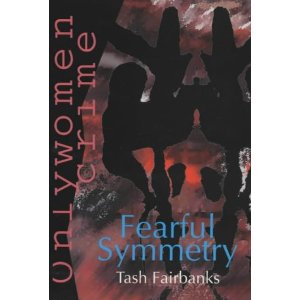 This review is the result of one of those serendipitous fishing expeditions on Paperbackswap.com.  I found Tash Fairbanks’ Fearful Symmetry completely by chance.  It is an enjoyable, engrossing read.  Unfortunately, I can’t find any other fiction novels from this author.

A coastal town in England is in the grips of hysteria– a teenager claims to find a fetus with the head of a goat and body of a human in the woods near the genetic lab.  A reporter looking to get back at her scientist mother writes incendiary, shocking articles making barely factual claims against her mother’s genetics lab and the local women’s clinic.  A day or two later, a local disabled girl is found murdered on the lab’s grounds.   The town church immediately begins rallying against the obvious satanic influence of liberals and feminists, things are made worse when scientists at the lab claim they are actually trying to find and cure the gene for homosexuality.  Sam Carter, private investigator (and recent returnee to sobriety after a bad breakup), is asked by the murdered girl’s mother to investigate.

It’s a lengthy read, divided into short chapters that tend to focus on just one or two characters at a time.  Sam Carter is the central element to the novel, but does not necessarily get the most page time.  Fairbanks surrounds her with characters just as well-developed and fleshed out, that each own part of the mystery and are important to its denouement.

For being over 20 years old, the story is fairly fresh and vivid.  The power of shock journalism, the infighting between different social progressive groups (factions within factions of lesbians, feminists, disability rights groups, etc.), the religious hysteria and manipulation; all of it was very familiar to me as a modern reader.  Refreshingly, when characters discuss these social issues, it didn’t read as dry or boring exposition, it felt organic to the conversation and plot.

Overall, I thought this was a great mystery novel, and was disappointed to learn that I won’t be able to read the further adventures of Sam Carter.