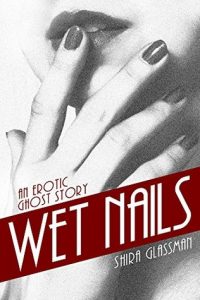 Adina Greenberg is taking a small break from her life as a grad student to spend a night watching movies starring her biggest Hollywood crush: Rose Hamilton. Rose Hamilton was a star in the 1950’s, and is definitely dead. Yet, she somehow also manages to step right out of Adina’s television set and into her living room.

The words “ghost” and “erotica” are not words I would often think to put together, and yet somehow, they work perfectly in this adorable and sexy short story.

Part of this, I think, is because “Wet Nails” doesn’t read like a traditional short story. Instead of being terrified by the ghostly apparition of her dead celebrity crush, Adina seems excited and nervous. In fact, the first thing she thinks when Rose Hamilton begins to climb out of her TV is how thankful she is that she just recently showered. At no point does Adina show any fear at the situation, which, while a little odd considering the circumstances, does work to help the “erotica” side of this ghost erotica along.

Another thing, I think, is that Rose Hamilton is not a vengeful ghost, seeking retribution over the horrible things that happened to her in her life. Instead, she claims she is kept alive by her fans, and because of that can occasionally drop in to visit some of them and thank them for their dedication to her.

Something I really enjoyed about this story was Adina and Rose talking about their different experiences with bisexuality. Adina is quite open about liking women – in fact, she shows a clear preference towards women. Rose is open as well, but makes it clear that she was not that open during her life. Any romantic interactions she had with women had to be hushed up, hidden, as they could have ruined not only her career, but her life. Adina, in turn, seems fully aware of the privilege she has in being able to be out and accepted, knowing that it wasn’t always like this and, for some people, still isn’t.

I won’t get too detailed about the “erotica” aspect of this story, but I do promise that it is hot, hot, hot. And yet, somehow also manages to keep that little bit of adorable that has been sprinkled through the entire story.

Overall, “Wet Nails” is a fantastic little story that looks at the different experiences women can have with queerness (bisexuality in particular, in this story), and how despite that, they can still find common ground, even if they are from entirely different generations. They form a sweet, albeit brief friendship, which obviously turns into a little bit more in a way that works perfectly even though one of the women is a ghost. I would highly recommend this story to anybody who is looking for something both sweet and sexy. Shira Glassman will not disappoint.