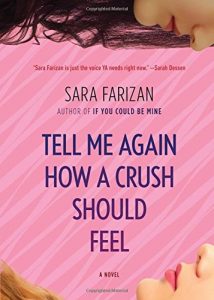 Leila knows she’ll never be what her parents want her to be. She doesn’t want to be a doctor (she isn’t even good at science), she has little interest in sports, and she has no plans to marry a Persian man. In fact, she doesn’t plan on marrying a man at all. These all things she figures she can deal with in the future, but when she befriends the beautiful new girl, Saskia, she realizes that keeping at least her sexuality from her parents may be more complicated than she thought.

Tell Me Again How a Crush Should Feel is not your typical coming out story. For one, Leila, the protagonist, already knows that she’s a lesbian when the story begins. It’s kind of refreshing to get to skip the self-discovery process, since it means that there is no frustrating compulsive heterosexuality to deal with. Leila doesn’t feel the need to experiment with dating men – she already knows it won’t go well. Even though I know it’s something that many lesbians experience, every now and then it’s nice to see one who doesn’t.

This is a character-focused story. The plot takes a backseat to Leila and her feelings, thoughts, and worries. She drives the story, and while her decisions can be frustrating at times, they’re also very realistic and lead to an impressive amount of character growth. By the last page, Leila is not the same girl we met on page one in the best way possible.

There is a bit of internalized homophobia, though it’s mostly shown in how Leila reacts to a group of girls she assumes are also lesbians, as well as a gay classmate. At first, she is not kind to them, and seems hellbent on the fact that, even if she comes out, she’ll never be like those lesbians. Watching her get to know these girls and realize that there is nothing wrong with being like them is one of the most satisfying bits of character development.

The romance aspect of this story is not at all what I expected. This initially annoyed me, but by the end I was more than happy about it. Out of respect for spoilers, however, I will say no more.

Another aspect of the story I greatly enjoyed was the focus on Leila and her family. Her genuine anxiety over what her sexuality will mean for their close relationship is painful to read in its realism. But we also get to see her grow in her friendship with her sister, someone she initially views as competition for her parents affection. [Major spoilers] I also loved the reaction that her parents had to Leila’s coming out. Many people might not, as they do not immediately accept her, but it’s very clear that they are trying and working toward full acceptance. As nice as it is to read stories where families accept their queer children without pause, it’s also enjoyable to read about parents who may not be happy about it at first but put in the effort to understand and love their child. Especially since I think this is a more common experience than is spoken about [End spoilers].

The only thing that lowered my enjoyment of this story was that at times the plot seemed to go in unnecessary directions, where it spent too long for such a short novel. One such directions also happens right at the end, which is disappointing. As well, the portrayal of one character felt steeped in internalized misogyny. This is mostly counteracted by the fact that all the other female characters in the story are well-developed, three-dimensional women who are allowed to make mistakes and grow from them. It is still frustrating to find even one character that falls into sexist stereotypes, though.

Overall, Tell Me Again How a Crush Should Feel is a solid, quick, feel-good story that will definitely put a smile on your face.