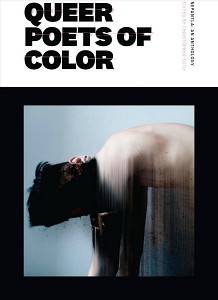 As soon as I came across this anthology and its haunting cover I knew I had to pick it up. As soon as I realized that the title of this anthology (and the journal it originated from) came from a quote from Gloria Anzaldúa, I knew I’d made the right choice.

The poems in this anthology cover quite literally every topic you can imagine. While this makes for quite a trigger-heavy piece of work, it also makes for incredibly raw and passionate art. Just as much anger and love spills from the page onto the reader, to the point where I often felt breathless after finishing a piece.

Poetry is, of course, deeply subjective, and relies just as much on the reader as it does on the poet. A big reason I felt these poems resonated with me were that they manage to draw the reader in and immerse them so deeply in the experience of the poem that the reader cannot help but want to invest their all into reading. After all, it’s beyond clear that each and every poet has put their everything into these poems. Reading these poems, I really felt it was necessary to respect them by doing the same.

Homophobia, transphobia, racism, police brutality, rape, murder, fatphobia, internalized racism, internalized misogyny, abuse. These are all issues dealt with within these poems, never sugar coated. They demand your attention, grip your arm and shake you until you understand the reality that the poet has faced. Because of this, I cannot recommend this anthology to anybody who may be triggered by these issues. This isn’t an anthology where you can just skip the poems you feel uncomfortable with. The poets don’t allow it.

Still, despite its heavy subject matter, I would go so far as to call Neplanta required reading for not only queer people, but anybody who will not be negatively affected by the triggers listed above. The stories told in this anthology are painful in their truth, gripping, and eye-opening. I felt different after reading it.

Too often we judge literature and poetry by our own ability to relate to the story being shared. Yet, Nepantla contains such a varied array of poets that it’s quite literally impossible to relate to every single one — and that’s kind of the point. We don’t have to see ourselves reflected in a piece of art to make it beautiful. It is beautiful because it is what it is, and even if it’s messy, or damaged, or hurt, it endures. It’s here to share it’s pain and mess with those of us who can relate and those of us who cannot, and to force us to see it’s worth despite everything the world has thrown at it. These poets deserve to be read by as many people as possible. I greatly encourage you to be one of those people.