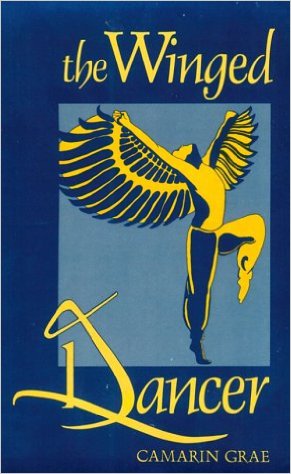 When Camarin Grae wrote the majority of her novels, there was no Amazon, no Goodreads, no peer reviews. The only way for a book to be reviewed was for the publisher to send galleys to periodicals months in advance of publication and hope for the best. Reviews for any work of lesbian literature were not only few and far between, but limited to the few almost-underground lesbian mags available only by mail or through the very few lesbian bookstores that existed at that time.

Scholars of lesbian literature have been slow to recognize—or even unearth—some of the classic works of lesbian mystery. Witness the very few reviews and ratings for brilliant novels like Claire Macquet’s Looking for Ammu, Nanisi Barrett D’Arnuk’s Outside In, or Helen Shacklady’s The Patterned Flute. Like Camarin Grae’s Winged Dancer.

The story begins with a fable. Hundreds of years ago, in a small South American country, several different tribes vied for existence. The cruelest and most powerful of the tribes subsumed or eliminated their rivals until only one of the smaller tribes was left—the Boweso, who escaped to an area impervious to attack. They worked out an egalitarian system of society where all members—men and women—enjoyed equal status. Each year they celebrated life by bringing out a life-sized statue of a winged dancer, fashioned mostly of gold. It is a fable of oppression and power, rebellion and redemption.

The novel itself has a similar motif. Kat Rogan is simply in the wrong place when a dying stranger begs her to deliver a coded letter to his sister in a fictional South American country. On her first day there, she is attacked by a man who wants to not only steal the missive, but rape her in the bargain and she kills him in self defense. But it is hard for a stranger to be believed in a country where abuse of women is almost the norm, and Kat is sentenced to life in a particularly unsavory prison.

Without going into any more detail about the plot, it is important to mention that while in prison, Kat learns the rules of the jungle. She finds herself first a bully (“I came to see others as either useful objects or interfering obstacles.”), then a near-slave (“My job is to perform as you wish, as a finely tuned instrument responsive to each whim you have.”) In other words, she runs the gamut of that power and oppression I talked about earlier. And of associated dichotomies like ethical and unethical, winners and losers.

Through all of her prison experience, Kat works on decoding the letter she received from the dead man—the solution of which would get her out of prison. It is an intriguing code referring to the original Boweso legend, which brings both stories together in a very satisfying way. It’s hard to find anything bad to say about this book. The puzzle is original, the action palpable, the romances titillating, and the relationships between characters realistic and totally human.

If Patricia Highsmith’s The Price of Salt has been resurrected to be the darling of lesbians the world over; if Charlotte Perkins Gilman’s Herland has been injected into college Women’s Studies classes, then Winged Dancer deserves its place in the pantheon of minor American classics.

For more than 200 other Lesbian Mystery reviews by Megan Casey, see her website at http://sites.google.com/site/theartofthelesbianmysterynovel/ or join her Goodreads Lesbian Mystery group at http://www.goodreads.com/group/show/116660-lesbian-mysteries