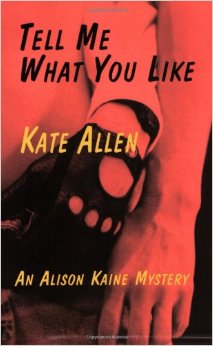 From a few things I had read about her books, I expected Kate Allen to write about “big tough butches in leather jackets they never took off.” In fact, that’s exactly what Officer Allison Kaine thought when she found herself in a bar full of leather-clad lesbians. What she discovers (and what I discovered) is that leather dykes range anywhere between “packing” ultra-butches and submissive lipstick lesbians. Some are lawyers, some work in animal shelters, some may even be police officers. The trick is in how well they are captured in the writing, and Allen makes each of her characters not only come alive, but come alive with interest. One of the many things I really liked about this book is that Allison and I are learning the same things at the same time, having the same questions—first wary, then joyous—about what it would be like to be part of this odd enclave of leather dykes that even other lesbians shy away from. In fact, an important subplot of this book is the way in which lesbians who are not into the S/M theme disapprove of the practice as a form of violence against women.

Meanwhile, other dykes (Allen rarely if ever uses the word “lesbian”) are being killed—dykes that had a tie to her new friend Stacy. If Allison doesn’t find the killer soon, Stacy may be arrested for the crimes.

Allison’s investigative technique is one of her strongest features. While interviewing suspects, she often delves internally into the philosophy of interrogation. For instance, here she is questioning one of the suspects’ partners: “The trick with this kind was to handle her gently, not excite her to the point where she wouldn’t speak. Playing it right was crucial; this woman would tell her everything she knew if she thought it would protect her girlfriend.” What Allison ultimately finds (and what I—what we as readers find) is a community of women whose lifestyles may seem strange, but who deal with the same emotions and foibles and self-doubts as the rest of us.

It is refreshing that Allison is simply a police officer, not a lieutenant or a detective as is true of so many other lesbian mystery protagonists (see Kate Delafield, Carol Ashton, Caitlin Reece, Rebecca Frye, Frank Franco, et al). Women can be strong role modes without having a high rank. Similarly, Tell Me What You Like is one of the strongest entries in the lesbian mystery field.

Allen’s use of first-person point of view is done so well that I no longer feel guilty for taking other authors to task when it is done poorly—which is often if you have read my other reviews. No awkward internal dialogue or descriptions of random minutiae. In fact the book as a whole is as close to A+ as you can get without being perfect. I only noticed one segue glitch, where a proofreader or typesetter screwed up, and a section near the end where an editor seems to have talked Allen into having the murderer go on and on in his confession, revealing details that are not brought out in the story—details that would have changed the tenor of the investigation. It was bad advice.

Still, almost everything about this book is first rate; the professional writing, the S/M vs non-S/M debate, and the intense characterizations make this an important book. Kate Allen and her character Allison Kaine are among those solidly within the pantheon of lesbian mystery icons.