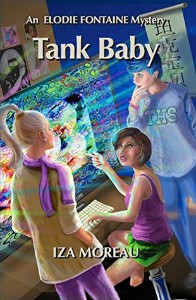 The short review is this: “Tank Baby is the first book in a marvelous new series that has the potential to, much like Nancy Drew did for past generations, capture the hearts and minds of young readers searching for a role model.” But because nothing is as simple as it sounds, here is the longer review:

Elodie Fontaine was born in Shanghai and for the first 7 years of her life, was part of her scientist mother’s secret project to see if children could learn computer code as a first language. But Elodie’s mother died before the project came to fruition and Elodie was adopted by the interracial lesbian couple Sandra Croft and Carmah Williams (who are, in fact, the main characters in Moreau’s earlier novel, The 5).

Ten years later, Elodie is a normal high school senior—a member of the tennis team and Math Club. All thoughts of her early childhood have almost disappeared when she begins to get strange messages referring to her mother’s project. Somebody wants the notes for that project and, it seems, will go to any length to get them.

Elodie is intrigued, but somewhat annoyed. The last thing she wants to do is get involved in a mystery that will take time away from her studies, her tennis, and especially her just-blossoming romance with her doubles partner, Kelli Ennis. But when she, Kelli, and their friend Margo are threatened, she has no choice, even though it means dredging up unwanted memories and shuffling through thousands of pages of code to figure out what worth the project might have to anyone.

And so he girls are off on an exciting adventure complete with an attempted kidnapping, threatening email messages and phone calls, and a mysterious death. And, of course, the budding romance. The mystery and its solution are both intricate and compelling; the romance both flirty and touching.

The allusion of Moreau’s series to Nancy Drew is subtle, barely more than a hint, but there is just enough there to imagine that the ghost of Nancy is looking down from a nearby staircase and smiling. Like Nancy, Elodie hangs out with two friends—Kelli and Margo, she drives a snazzy new sports car, solves mysteries, and is seemingly unable to swear. But that’s pretty much where the similarity ends except for the dynamic, narrative-driven cover that even has a cameo of Elodie on the spine.

While Nancy, George, and Bess are straight (although I have my suspicions about George), Elodie and her friends are all members of the Gay/Straight Alliance at their high school. Yes, there is some homophobia and yes, there is a coming-out scene, but these are side issues to this novel. Tank Baby is all about the mystery and the relationships between the friends. In other words, it is both character driven and plot driven. A nice combo.

As far as I know—and I am a long-time close observer of the subject—the projected Elodie Fontaine Mystery Series is the first-ever Young Adult mystery series featuring a lesbian sleuth. That in itself is worthy of attention. That Tank Baby is an enjoyable first foray into Elodie’s world is a promise of good things to come. Am we won’t have long to wait for the sequel. In the tradition of the original Stratemeyer syndicate that produced the bulk of juvenile series novels in the early to mid twentieth century, the first three Elodie novels will be released almost simultaneously. According to the author’s blog, the next novel is coming in March and the third in May. I like Elodie and Tank Baby a great deal; but more than that I like the idea of a YA mystery series that LGBTQ youth can call their own.

Note: I received a review copy of this book from the publisher through Lesbrary.