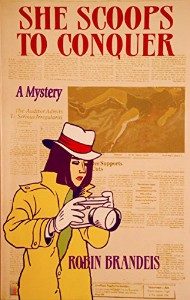 Lane Montgomery is the chief investigative reporter for Louisville’s “reputable” newspaper, The Louisville Daily. Ann Alexander is her counterpart at The Metropolitan Inquirer, a tabloidish rival of the Daily. Lane claims to despise the beautiful but unethical Ann until they find themselves having to investigate what appears to be two connected crimes involving a slain 15-year-old inner-city boy.

The crimes—and the mystery itself—are no joke; in fact, Lane uncovers a serious lack of fairness in her own profession when she notices that stories on crimes against minorities are generally buried deep in the paper while high-profile crimes against whites garner banner headlines. Ditto for the police investigations of same. But when Lane gets a grudging go-ahead to write an in-depth piece on the young man that was killed, she begins to find out a few facts she doesn’t want to know.

The case is a serious one—and dangerous, too, as Lane finds out while doing her research. On the other foot, Lane’s interactions with Ann are not only among the most humorous in lesbian fiction, but the most sensuous as well. Both women are fem—and each tries to out do the other not only in getting her story first, but in insisting that the other is the more beautiful and desirable. Like its near namesake, Oliver Goldsmith’s She Stoops to Conquer, this can be considered at least partly a romantic comedy.

Brandeis maintains her first-person point of view in an interesting, straightforward, and humorous way all at once. Lane is a very likable character and it is a shame that she was not brought back for an encore. It is a point of view that lesser writers, like the more popular Mary Wings or Sarah Dreher, could have learned a lot from. There is some wisdom in the book, too. When Lane speaks about her homophobic mother, her grandmother replies, “Now, I love your mother, but she hasn’t learned yet that a daughter’s love is worth a whole lot more than other people’s opinions.”

And hey, here’s something unexpected. The solution of the mystery is not nonsense as are most other solutions in lesbian mystery fiction (and mystery fiction in general). As I often mention, readers should no longer expect solutions to make sense, but this one does. The only real flaw, I think, is that the author unnecessarily keeps an important interview with a suspect a secret until the end. It mars the ending a little by making it seem rushed. Still, I recommend the book wholeheartedly. Give it a 4.5 or so and put it in your Top 25 List.