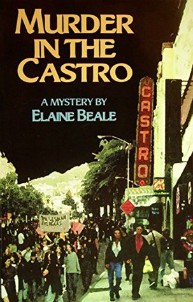 Lou Spencer, your normal, tomboyish young Englishwoman, has fled to San Francisco to escape a bad relationship in her home country. Five years have passed, and although she has been celibate the entire time, she has found a meaningful job as office manager for a LGBT Crisis Management Center. But when one of the Client Advocates is murdered in his office after hours, her rather insulated existence is disturbed to the max. All the indications are that this is a random hate crime, but is it?

A literary theory professor I know once said that whether or not a reader likes a novel has little to do with its importance. I don’t like Madame Bovary, for instance, but that doesn’t mean that Flaubert didn’t influence generations of writers. Elaine Beale isn’t Flaubert, yet my friend the professor’s tenet still holds true. I didn’t care for the novel, yet I realize that there are many things unique and, yes, important about it. Let’s start with these.

First of all, this is what I might call a Movement novel: one that chronicles some form of LGBT or women’s politics in the last years of the 20th century. Think of Vicki P. McConnell’s The Burnton Widows, Barbara Wilson’s Murder in the Collective, or Mary Wings’ She Came Too Late. Chronicling the history of this movement is important not only for what the movement accomplished, but because it was so relatively short, coming in with the hippies and out with the yuppies. Beale gives quite a nice description of an office whose purpose is to help gays and lesbians who have been abused on the street or in the home.

The second excellent thing about this novel is the mention of same-sex domestic abuse; Lou has come to the U.S. to escape from her abusive girlfriend.  While many lesbian novels focus on the abuse of a female character by a husband, father, or other family member, few lesbian authors feel comfortable confronting abuse in their own domestic partnerships.

The mystery, too, is an interesting one. I found myself wanting to know who the killer was, although an observant reader could have guessed who the culprit was on page 22

It is a fast-paced novel, moving quickly from one clue to the next. To the author’s credit, she uses similes instead of plain description. Unfortunately, a lot of the comparisons are overstated, such as when, at a local news conference, Lou describes the media as being “like sharks at a feeding frenzy,” or “if I ever became mayor, I’d not only make car alarms illegal, but possession of them punishable by several years hard labor.” Most of these turns of  phrase could have been (and probably should have been) used to better effect somewhere else. Like in a stand-up comic’s routine.

The investigating officer is homophobic to the point of cliché. Although this is not so unusual in lesbian mysteries (see Kate Delafield’s first partner)—or even in real life—it just isn’t very interesting or pleasant to read about them. Unlike Kate Delafield’s partner, who seemed real, with a real family and real plans, there is nothing distinctive about this man, which tells me that the author really didn’t know her characters as well as she should have. The ending, too, is obviously staged for effect, not coherency. Give her a half star for bringing up same-sex domestic abuse, but take it away again because she only refers to it obliquely—she never really takes us as deeply as she might have into Lou’s abusive relationship with her ex.

All in all, there is nothing terribly wrong with the writing, or the characters, or the mystery, or the romance. The writing style and point of view are similar to that of Mary Wings. In fact, Wings also wrote a book with The Castro in the title in the same year as this one. Fans of Wings and Sarah Dreher will probably like this book. Unfortunately, I’m not a fan of either. You know how you sometimes meet someone and the two of you—like me and Flaubert—just don’t click? It is the personality of the writing—and necessarily of the first-person narrator—that keep this book from getting more than 3 stars. But that is still a fairly good rating, considering.

Note: I read the first New Victoria printing of this book.