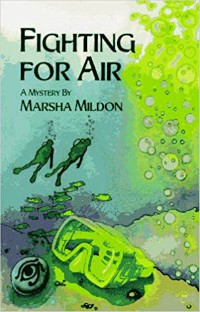 This book is a prime example of why ebook samples should be longer. If Fighting for Air had been available as an ebook when I read it, I would have given up after the ten-percent sample that Amazon offers. At the time, however, there was no ebook—New Victoria came out with one in 2016—21 years after its paperback publication and several years after I read it. So I persevered and was rewarded. Am I rich because of it? No. But I gained something I didn’t have before.

Calliope Meredith is a private detective and former scuba diving enthusiast living in a coastal town in Canada. When she is invited to participate in a dive off Anemone Island, she is at first reluctant because her lover was killed in a diving accident only a year previously. But she is persuaded by her good friend Jay, who is running a diving certification class and wants Cal to help her out. Then the unthinkable happens: one of the students drowns and Jay is arrested for homicide-by-negligence. Unless Cal can prove that the diver, an Ethiopian graduate student named Tekla, has been murdered—and figure out who murdered him—Jay might be sent to jail for life, just as Cal is falling in love with her.

Mildon’s cast of characters is a rich one, with beautiful lesbians a-plenty: Cal, her best friend Danielle, Danielle’s lover Sally, and the likable old Faith, who keeps an eye out for all of them when she can. But many characters makes for many suspects, and one of Cal’s friends may be a murderer.

As mysteries go, this one is better than most, but you may have to do some research into scuba diving for it to ring true. I did, and I learned a lot about how poisonous carbon monoxide can find its way into scuba tanks. In fact, the whole diving motif was extremely well done—accurate and interesting. The author also goes into the theme of activism vis a vis third world countries. It seems that Tekla was a relation of the deposed emperor Heile Selassie, and harbored the grandiose  scheme of returning to his country and taking over power from the military. The history of Ethiopia’s aggression toward the neighboring state of Eritera is also gone into in some detail.

Cal is not a particularly noticeable character. She plods from one suspect to another determined to exonerate her lover even after Jay gives up and resigns herself to prison life. Cal’s status as a P.I. is stated but not gone into with enough detail for us to really believe it. These are a couple of minor but important detractions. A more significant flaw is in Cal’s relationship with Jay. Quite simply, it isn’t written very well. Cal’s previous friendship with Jay is told in asides and occasional flashbacks, not as part of the story line, so it seems very abrupt when Cal touches Jay’s shoulder comfortingly and shudders with sexual feeling. The flashbacks explain after the fact. And because Jay has heretofore been straight, I felt like I was missing out on a lot of foreplay.

Despite the flaws and the non-flaws, give this book an average rating. 2.5. You’ll learn some important things, but you’re not likely to be very engrossed in the story.