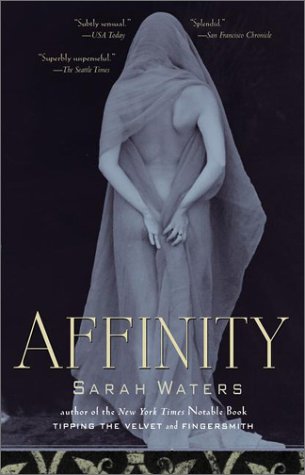 Affinity was my first venture into the writing of Sarah Waters, and I have to say that I particularly enjoyed it.  This novel in particular came well-recommended: firstly by Amazon(!), and seconded by my advisor, thirded by a friend who owned the book and wound up giving it to me(thanks, Emily!). I especially appreciated the recommendation by my advisor, a religion professor specializing in Spiritualism.

Sarah Waters weaves the tale of Margaret “Peggy” Prior, an upper-class woman in 1870s England who is recovering, it would seem, from a suicide attempt – something only vaguely touched on, as it would be in society back then – and her project of becoming a visitor to a women’s prison to help her spirits rise(and also to get her out from under the wings of her overly protective mother). At Millbank Prison, she meets Selina Dawes, a medium who has been imprisoned after a séance gone horribly wrong.

Sarah Waters is a wonderful writer; she begins with the night of the séance, and Selina’s backstory is woven in with the first-person narrative of Margaret’s diary entries.  My advisor is doing a research seminar this semester on Spiritualism, and in class we read selections from Susan Willis Fletcher’s Twelve Months in an English Prison – it is clear that Sarah Waters took this account as inspiration for this novel. At one point, Peggy goes to a Spiritualist reading room to check the accounts of Selina’s trial, and there are some definite parallels to the amazing occurrences that happen between Selina and Peggy. Affinity is a bittersweet novel – well-written, wonderfully crafted, but still resonating with the difficulties of the time it takes place in. It is not a novel for those who want their endings happy – once the reader realizes where the plot is headed, it is a rough ride to the finish – but it is well wrought, and well worth reading.  I appreciated the historical realism of how Spiritualism was treated, and now that I’m well into the research seminar, I can appreciate the historical realism of the prison system at the time. But perhaps “appreciate” is not quite the right word…

If you’re interested in Ms. Waters’ work, but don’t have time for her longer works(such as Tipping the Velvet  or Fingersmith), I would definitely recommend Affinity – but prepare yourself for a bit of supernatural heartbreak.