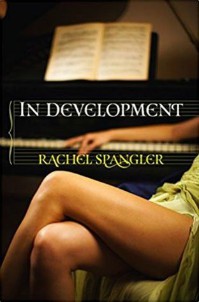 Cobie has been in nice, safe romance films for too long. She wants to challenge herself with by acting in the lead role of Vale, but studios won’t take her because she lacks an edgy public persona that will sell the character to audiences. Lila is a pop star who is taking the world by storm and building an empire, but she has run out of new things to excite and shock the public. They join together in a fauxmance to help both their careers. However, things get complicated when they grow close and old demons of the past rise up.

This was a fantastic read! It has two of my favorite tropes in romance, which is the fake relationship and the Hollywood setting. Both are done well and the author clearly had fun using them to their full extent.

The story is told from both Cobie’s and Lila’s point of views, which really helped add to the romance and also helped me understand where both of them were coming from in disagreements. One of my pet peeves in romance is when there’s a big misunderstanding that seems to come out of nowhere with no established character flaw to motivate it. Both Cobie and Lila are flawed and have wounds from the past that are established early on and contribute to problems in their relationship. Every time they had a fight, I felt I understood where each of them was coming from, which helped keep me engaged.

The other characters were just as fun and interesting. Lila has two close friends that also work for her, Felipe and Malik, who are in a relationship. Cobie has her sister Emma and best friend Talia. There are also Lila’s and Cobie’s managers, Mimi and Stan, who get them together for the fauxmance in the first place. All of them really helped flesh out the book beyond Cobie and Lila, but didn’t distract from the romance.

Speaking of which, the romance was done really well. Cobie and Lila feel the heat between them but deny it because they need this fauxmance to work for their careers, and also because of past experiences that they haven’t dealt with yet. I could fully believe these two were attracted to each other and falling for one another. The sex scenes were also pretty great. Throughout the whole story, I was always engaged and excited to see what was coming next.

Another aspect I enjoyed was the believability of their careers and how those careers were interwoven with the plot. The story really shows you how important acting and singing are to Cobie and Lila respectively and how those parts of their lives affect them and this romance.

Overall, I thoroughly enjoyed this book and I recommend it to anyone who wants to read a great romance between two women.