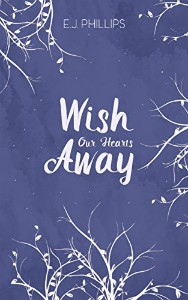 ”If nothing is right, then you have the freedom to change anything”

This week is pride week in Malta, and I’m going to share a very queer read that I enjoyed a lot. The book has a diversity of queer characters. It’s not just sapphic but has two boys (well, youth) that are fond of each other. Sometimes it’s good to get in touch with the diverse identities in our communities. It’s YA, and there is sapphic and ace (asexual) representation!

Wish our Hearts Away by E.J. Phillips is about a group of 4 teenagers–Lily, Girija, Michael and Sam–living in rural Australia. The story is told from Lily’s and Sam’s point of view, but Michael and Girija are protagonists as well. All four of them are confused and insecure, which does not help when they find a place–which they name the Grove–that grants wishes. Strange things start to happen after Lily and Michael’s Uncle Ben is discovered dead.

Lily and Michael are siblings; Sam is Michael’s best friend, but is also very close to Lily; and Girija is Lily’s best friend/crush. Lily feels lonely even surrounded by people. She finds another family in her late uncle’s old theater group, but having two families is difficult and leads to more confusion. Girija is scared of disappointing her family. Sam does not speak about being in an abusive household. Michael does not speak about what he feels and what he knows. These characters were complex and realistic and have conflicting wished which are keeping them back. It was interesting to see the dynamic of the four in the group. There are two couples, but also a childhood trio of friends. Michael and Girija are the ones people take notice of (even though they may not want it), but the story is told from Sam’s and Lily’s perspective. They all have their story and their secrets.

As supporting characters there were many family members–from unknowingly supporting and loving to neglectful and toxic to abusive and hindering to scared. There was also found family–between the four and within the theater group. The parents themselves have character development in the story. At times, I was angry with them because they were so realistically parents. It was also great to see the parents referred to by name, rather that X’s parents. Parents have identities too.

All the story elements are connected (in the words of Dirk Gently: everything is connected). The plot development was gradual and with interesting plot twists, most things I didn’t guess from before. One thing which stuck out a bit was that Girija didn’t feel so involved in the mystery. Her wishes were not being granted, or granted problematically like the others, but things were not happening to her like they were the other three. In a way she did move later, so I could justify it.

This book is indeed very queer with sapphic and ace (gay) representation! It was an emotional roller, coaster but in a way, the Grove is representative of growth and the difficulty of growing up, especially while different. This was not a coming out story, it was more of a sorting out with fantastic fantasy elements.

I wanted to see more about these characters. I love them. Michael and Sam had a connection and defended it even though they hadn’t necessarily spoken about it and the connection was different from what people usually expect. Lily and Girija needed to find themselves and be confident in who they are. The story was more about the individuals than the couples but the group was there was each other. The protagonists were wishing their hearts away, but this book had mine.