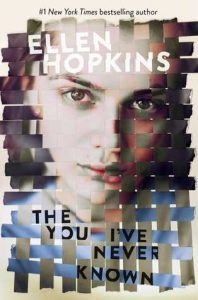 ”Is there such a thing as promiscuous love, or dies it only apply to sex?”

The You I’ve Never Known by Ellen Hopkins is a 500+ page book, written almost entirely in poetry form. It was such an intense read! It leaves an impression; I couldn’t help not think about it when I was not reading it. I read this book thanks to RivetedLit 25 Reads of December. They do have free Queer YA books almost every week (although with the different identities within the Queer spectrum).

This book is dark, and fast to read. The poems are in different forms that read more like prose but shorter than if it were prose. They were my type of poetry so great. I have to take time though to process so it took me a while.

This books is about ‘Ariel’ who lives with her father. For the first time, they’re sort of settled somewhere instead of going round the country on an incessant road-trip. She’s friends with Monica and Syrah – her first friends since ever. She’s actually more than friends with Monica. There’s a connection there and Monica is ever-supportive and ever-patient. Ariel doesn’t know how to feel, she’s confused. But that confusion increases when Gabe, her father’s partner’s (Zelda!) nephew comes to Sonora. She likes both Monica and Gabe and has to figure out what to do.

More than that though, this book is about Ariel’s relationship with her father – who’s probably the most despicable character ever but whom she cannot help but love because he’s been the only constant in her life. He is so abusive though! A lot of trigger warning here! Including a rape attempt. And lots of violence all around.

Soon, her mother – it was kind of predicable who that was and how she found her- comes into her life again and tells Ariel that her father has been lying to her all her life. More confusion and identity crisis ensure.

I liked how abuse was shown, in the sense it’s very realistic. Gaslighting was mentioned by name and it was shown clearly how her father did it. The value of honesty is given a lot of importance. That was refreshing as it reduced the usual teenage drama found in books. Although there was a lot of drama, nothing major was about dishonesty – at least apart from her father’s lies. Maya was very honest and open even when writing about small things, which her father had withheld from her. Zelda, although we didn’t see a lot of her, was another nice character that supported Ariel, though a bit alcoholic, which goes to show that punches don’t need to fly when someone is drunk.

I also appreciated the Spanish but like why did there have to be a direct translation right after? Footnotes could have been used. The translations were a bit out of place.

Although Gabe seemed like a really nice person (when not blood-driven) I didn’t really like his connection to Ariel. It’s like ‘boy-next-door’ connection, or maybe just teenage lust. Monica was a really enjoyable character and Ariel, I was both worried and upset with. However, I know it’s wrong to feel upset since she was groomed from a young age and couldn’t see the abuse.

Apart from Ariel and Monica there was more queer women representation.

Ellen Hopkins writes beautifully and this book is partially inspired by real events!

This is a noteworthy book but you must have stomach for it. It’s dark because these things could happen to anyone and in plain sight.