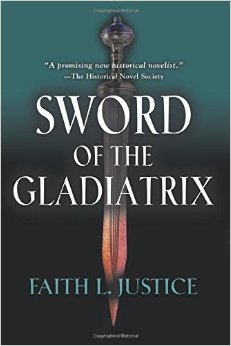 “This has nestled between my breasts, lifted with my breath and listened to my heart.”

The story is about a woman called Afra. Afra, which refers to the fact that she is from Africa, is from the kingdom of Kush, modern day Ethiopia and she is a hunter- or venatore (beast hunter) that served the ruler of her people. Due to really sad and angsty reasons she ended up as a slave. In the beginning, her situation is not so bad as Marcius, who she owned a life debt to and was her master, trusted her opinion and was a sort of friend to her.

The story is also about Cinnia, who comes from the Icene people in Britannia, modern day England. She was not raised as a warrior and would have rather been a storyteller at one point but soon learned to fight after sad and angsty circumstances in her life that then led her to be one of queen Boudicca’s female guards.

The story, as I mentioned is sad and angsty but also heart-warming as the two women discover each other and the ending did surprise me and kept me on my seat flipping pages. The beginning of the story sees Afra and Cinnia about to fight one another to the death in an arena, for the Emperor Nero; who I think in a paragraph the author summarised what he was all about rather than the tyrannical perception many people have of him. The chapters following the first show Afra’s and Cinnia’s stories and soon, they merge in Rome.

Cinnia’s and Afra’s relationship is the thing that grounds them to life. It’s the thing that keeps them going and helps them heal at the same time. They’re both strong women, that endured a lot and have their own scars. Afra is used at being the ‘top dog’ but sometimes Cinnia is better than her and Cinnia has lost so much and she only heals because of Afra’s care. Their relationship was easy to start but was difficult to maintain, they worked for it though. Most of the supporting characters are not nice, but I think, they are real and add to the story. There are even some historically famous background characters- the ancient history geek in me was ecstatic.

Be warned, there are a lot of triggers in this book, especially for death, mentions of rape, gruesome violence, animal to animal violence and slavery. Generally, these things are to be expected from this time period.

All in all, the book is well researched and at the end there is an explanatory note and glossary which I admit to liking a lot. Sometimes it may feel that with all the Latin words and life explanations, the story is a bit bumpy. It’s a historical fiction however, and I think it’s good to build the history part as well as fiction. I think Bonus points should be given to the author for demonstrating the diversity within the Roman Empire and for including a multi-racial and strong relationship with historical background of some known events.

I recommend this book to anyone interested in Ancient history and Rome, that isn’t easily triggered and that wants to read about a strong relationship. I suggest you read the end notes as well! Very informative.