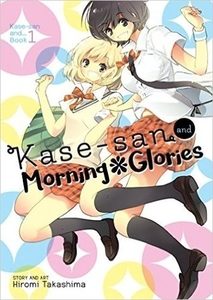 Don’t you just love when you discover new queer lit (especially mangas which are so rare!) thanks to a public library?

Kase-san and Morning Glories manga is about Yamada (despite the name) who develops a crush on Kase-san, a tomboyish track athlete from next class. Yamada is at times reminded that Kase is also a girl and is always berating herself, but she does eventually get used to it. The two develop a friendship over gardening, walking together and training, and Yamada starts to believe in herself because Kase does.

It has manga-style sexiness (panty shots and boob shots) but there is nothing explicit and in fact, I found this in the Junior section at the library! It’s actually really cute at times. The two are obviously crushing on each other and, hurray, the ending was great! The story doesn’t drag out too long, though I do love slow-burn. It’s very fluffy: I mean, Yamada has a tendency to tug at Kase’s jacket to get her attention! And the support they give each other is so healthy and cute! A highly recommended series for those that like girls loving girls (or women loving women). It actually has a plot although a generic slice of life/high school theme.

The series in general has 5 books and there is a spin-off called Kase-san and Yamada which so far has 1 book. There’s translations in English and German available and there is even an OVA available to watch!