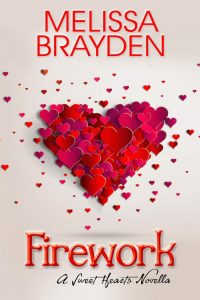 “There were olives in her drink, she could fashion an olive branch”

It’s summer (here), which means beach reading! Granted, I live on an island and have not yet gone to swim but you get what I mean: giving romances another try. I settled on Firework by Melissa Brayden because it’s a novella and it sounded interesting.

Firework is about Lucy, a CEO of a Global Newswire and Kristin, a reporter. They meet when Kristen goes to interviews Lucy about a PR her company helped to issue, only it was more of an interrogation because that story ended up being false and the company does not fact check. Despite the bumpy start, they meet at Lucy’s favourite bar. Kristin is new in town and she starts going to the local queer bar of course.

Lucy is feminine, classy and attractive and successful. Kristen can be a bit intimidating and persistent and wants to succeed. They at first have very little in common but start to show each other their world.

Lucy and Kristen are both stubborn and both want to make each other understand, both are also lonely. Kristen just moved and Lucy’s best friend has a family (on which the novel in the series is actually based on but you can read this book without the other). They state they don’t hate each other (solid basis for a relationship!) and start to get to know each other. There is something bubbling between them and their relationship is very much based on give and take. In a way, it felt both stable and a whirlwind romance.

I liked that despite Lucy being a CEO, in her relationship she’s not controlling. In fact I would say that most of the time, it was Kristen that steered the relationship. The fact that they were different made the romance more interesting. My favourite moment was very realistic and involved a protest. Lucy cares! She’s not a cold-blooded CEO. It was cute and ‘squee’-worthy. Down with apathy!

Ignoring the work issue however, is not good. I liked that it was a very realistic work issue and that ethics were discussed. On this, I was on Kristen’s side. If you’ve read this novella, whose side where you on when the issue happened?

One thing which irritated me was at the start of the novella, when they see each other at the bar. It went from considering that Kristen is straight to ‘’so she’s a lesbian’’ with no consideration for other sexualities. Authors please take note that casual erasure is not cool.

The fact that their chemistry was ‘off the charts’ was repeated several times. I guess, since it’s a novella it’s harder to show but the repetition irked me.

If you like romance, this is a perfect summer read (especially if you’re interested in the US). For those that don’t like much romance, I found this book interesting because of the ethical issues and the activism mentioned (environmental). I could definitely relate to that part and the protest and after were definitely romantic in a caring-for-where-we-live way.

This novella is also available as an audiobook, perfect for transits and relaxing moments.