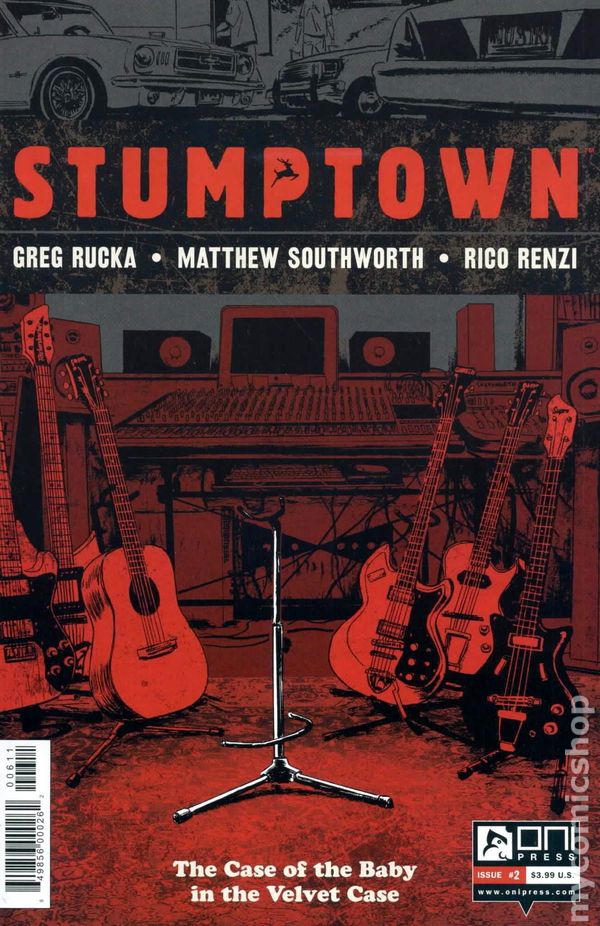 It is only in certain circles that one hears Greg Rucka’s name added to the discussion about not-necessarily-heterosexual women in fiction. He stands (in my mind) alongside Gail Simone and Ed Brubaker when listing the writers who have made a positive mark on comics (specifically the DC Universe) when it comes to women. I wrote about Stumptown vol. 1 in February of this year, recommending the book not only to comic book fans but to those who enjoy noir, carefully plotted character pieces, and solid gold heroines — heroines who just happen to be bisexual.

Volume Two picks up soon after volume one — Dex Parrios is still taking cases for hire, still struggling to make a living while caring for her brother Ansel and continuing to dodge the heavy hammer of Marenco’s crime underground. Dex is, as many have noted, a cross-section of many of Rucka’s female characters: plucky, determined, rough around the edges, and playing by her own rules. This is a lot of what makes Dex such a good P.I. on the page and on the job.

In Volume Two, “The Case of the Baby in the Velvet Case” another of “Rucka’s women” previously seen in the novel A Fistful of Rain crosses paths with Dex — Miriam “Mim” Bracca, guitarist for Tailhook. Mim has a history with women, but her true love is Baby, the guitar that has been by her side through the ups and downs of Mim’s career. Confronted with a missing Baby, Mim brings the desperate case to Dex, but seems to be hiding something.

While romance is certainly not front and center here, I enjoyed the flirtatious back and forth between Mim and Dex. I enjoyed knowing that these are not characters defined by presence or lack of sex scenes. These are real women with real attractions, and sometimes it just doesn’t make sense to get hot and heavy while being chased by thugs!

As a previous fan of Stumptown, I didn’t need much convincing to read on, but Rucka (and artist Southworth) still had some treats in store. Dex here reads a little more at ease with herself. If I only had one word to describe volume two it would be fun. A missing guitar doesn’t seem high on the ranks of thrilling adventures, but despite the set-up, Rucka delivers a story full of snark, one-liners, and one of the best car chases I have ever seen.

Published once again by Oni Press, Volume Two will be released in October, and comes with Rucka’s thoughtful prose discussion on the nature of the P.I. story.