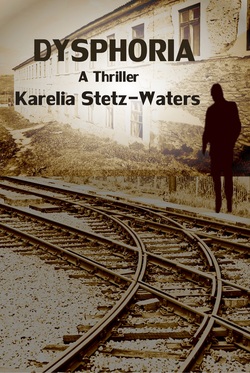 Dysphoria. On its own, the word means simply the state of feeling unwell. It is a loaded term, however, especially in the queer community. Trans*-folk use the word to describe the feeling of incongruity between how the body exists and how the brain expects the body to exist. Since the mainstreaming of that definition, dysphoria has also come to indicate any incongruity between brain and body, including such movements as transethnics, some furry lifestylers (humans with the belief that they are or connect to a particular animal), and apotemnophilia — self-desired amputation. This last borrowed definition is one of the major themes in Karelia Stetz-Waters’s debut thriller of the same name.

The story follows protagonist Helen Ivers as she begins her new job as president of a small New England college in the town of Pittock. Ivers is cool-headed and utterly capable, but she is haunted by the memory of her sister and her gruesome suicide. That haunting begins to creep into Ivers life as the college is rocked by the discovery of legs, dismembered by nearby train tracks. Flanked on one side by Drummond, the well-kept elder provost at Pittock, whose desire seems to lie with keeping the controversy quiet, and on the other with wild card Adair Wilson, a strikingly handsome lesbian drama teacher who is instrumental in finding the body parts and unwilling to let the tragedy go unsolved.

I found Dysphoria to be well-written, especially in comparison to many books in both the lesbian detective and thriller genre. The characters, especially Ivers and Drummond, are fresh and full-bodied (pun intended). At times, Stetz-Waters lingers in more literary and even experimental places, playing with form and perspective in some truly unexpected ways. I also found the story to be something truly original. As a fan of true crime, procedural shows, and, obviously, lesbian lit, Dysphoria definitely borrows from aspects of each genre but pulls together into something quite fresh. I especially identified with Helen Ivers. Her behavior, namely engaging in unfulfilling and utterly unerotic heterosexual sex in an effort to escape her own mental space, was frustrating (and frequently unpleasant to read) but I saw echoes of her thought processes in my own life.

Aside from the straight sex, Dysphoria also offers truly disturbing POV segments from the killer. We learn about his history of abuse, about his obsession with creating amputees — and the sexual nature of his fetish. I understand, as a reader, why this POV is included. It certainly ramps up the tension and creates a few “ah ha!” moments later in the book. For those more sensitive to stuff of this ilk, however, this might be the ultimate turn off.

The other major issue I had with Dysphoria was with love interest and plot driver, Adair Wilson. Because the book stays in Helen Ivers’ perspective most of the time, and because Ivers herself does not know much about Wilson, the character is left largely undeveloped. Wilson seems to act mysteriously when the plot calls for tension, to explain herself when Ivers needs the relief. Even the descriptions of Ivers’ attraction to Wilson are spotty at best. Aside from Wilson’s shocking beauty, I had trouble understanding why Ivers was attracted to her. Some of the circumstances the two women are involved in are entirely unromantic and even disturbing — on a level completely different from that of a serial killer. I felt like I should be fascinated and enamored with Wilson, but was given no reason to. Sadly, much of the book’s success hinges on this.

I will also draw attention, once more, to the title. Dysphoria. As I don’t possess any expertise in psychology, I cannot speak to the legitimacy of any of those who claim the term as a method of expressing body/mind disintegration, but as an ally of the trans* community and best friend of a genderqueer individual, I found myself pausing on multiple occasions when the lives of “transexuals” were used to (perhaps) legitimize the dysphoria of amputee “wannabees” — and by more than one character! I doubt it is Stetz-Waters’s intention to marginalize people who may be a part of her audience, but given her reassurance to me as introduction that she was, in fact, a “gold star” lesbian, I don’t think Stetz-Waters is all too concerned with being inclusive.

My reservations aside, I found Dysphoria to be, for the most part, an engaging and even thrilling read. As an alternative to much of what is currently available in lesbian crime thrillers, Dysphoria is well written, edited, and plotted. Each reader may have to contend with the level of violence, disturbing content, and casual marginalization they are willing to endure for fiction. While mildly curious about the sequel reportedly in the works, I don’t believe I will be tuning in for more of Stetz-Waters’s thrillers.