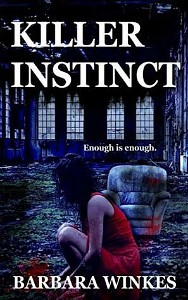 Unsolved serial murders committed by one, or maybe two people, will keep you guessing in this thriller that takes place in the dead of winter. Nothing like solving a murder over Christmas. It is low on holiday feels, and high on intrigue.

Joanna, an ex-cop who served time for killing a serial offender in cold blood, just can’t seem to let her old life go. Or maybe, her past has a way of catching up with her. Her life after prison is simple, if not boring. She works in a warehouse and spends time with her two straight female friends: a former fellow inmate, Kira, and the IAB cop that sent her to jail, Vanessa. Her and Vanessa spend most of their time together getting drunk, arguing, and picking up respective one-night stands. An attempted murder in her hometown, with a profile like one of her old cases, forces her to navigate her relationship with her former partner on the force, Theo.

I went through a Patricia Cornwell phase where I read about twenty Scarpetta novels in a year, and I’ve watched my fair share of crime shows, but crime thrillers are not my go to genre, and I haven’t read many lesbian ones. This was a good entrée into the genre.

Killer Instinct is an entertaining read. I didn’t personally like the snippets into other character points of view—it happens infrequently and with different characters points of view being told throughout the book that it seemed more distracting than beneficial. I would have preferred finding out plot points and relevant case information at the same time the protagonist Joanna does. But, as a reader, knowing outside information did increase the suspense factor. My other critique is that the supporting cast was not developed enough to be really invested in them. I wanted to know more about their back story and certainly more about Joanna and Venessa’s road to becoming friends.

Overall, there were enough twists and turns for me to consider this book a “page turner”, and at 165 pages it is definitely a quick read. This is a thriller, but there is also a romantic undercurrent, and despite Joanna’s penchant for one-night stands (the sex throughout is of the fade to black variety), she might have finally met a woman worth having a relationship with. Will her past will keep coming back to bite her, ruining her chances at a longer term relationship? Will she help her old partner solve the case and finally exercise her demons? You’ll have to read it for yourself to find out.