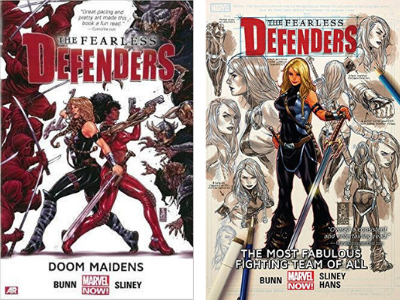 As you may know from some of my earlier reviews, I am new-ish to comics and therefore discovering old gems all the time. Fearless Defenders (2013) is a 12 issue run that has been captured into two trade paperback volumes. Some of the individual issue covers are nothing short of amazing, including a romance novel themed one and a Sailor Moon themed one. This review contains minor spoilers about some characters sexualities, but hopefully without giving too much context, the stories will still feel fresh when you read them.

What I enjoyed most about this series is that it is fun and campy and unapologetically female fronted. The costumes are often over the top, the locales exotic (from the cosmos to the home of the Amazons), the character combinations bordering on weird, but somehow it all works perfectly. The Fearless Defenders is a group helmed by Valkyrie, and made up of a misfit group of fearsome ladies, with varying levels or superpowers and super abilities including the likes of Clea, Dani Moonstar, Hippolyta, and She-Hulk. Their objective is to grow their team and protect the universe from evil forces and the various brewing plots to bring down humanity.

There are two explicitly queer female characters in this run, and even though her sexuality is not really discussed in these pages, Valkyrie is canon bisexual and certainly can be read that way in Fearless Defenders. No coming out stories here, when romantic relationships between women come up, they just happen without any commentary, and that is a big plus for me. There is so much good banter, especially instigated by Misty Knight, a bionic private eye with a gorgeous afro, who happens to be one of my favorite characters from this series. She is best friends with lesbian Archeologist Annabelle Riggs and also ocasionally her contract employee.

Dr. Annabelle Riggs is a human (midgaurdian) about to embark on the adventure of a lifetime. She is what I affectionately call “adorkable:” basically, if Daria and Lara Croft merged, you would get Annabelle. She has the cutest freckles and Rachel Maddow level cool glasses. Plus she is intelligent and kindhearted. There is no shortage of Misty giving her friend a hard time about her love life, and how much of a disaster gay she is. Annabelle is one of the throughlines of this series, and I think it is one made stronger by having a human to balance out all the superheroes.

The other queer character is baby gay Ren Kimura, and dancer who unexpectedly develops superpowers. Ren shows up in the back half of the series (or tpb Vol 2) and is new to this whole superhero thing. She is also a young adult trying to figure out her life while living with overbearing and conservative parents, so, highly relatable. In my opinion, her story doesn’t get enough air time, but it is still a nice ‘coming into adulthood’ journey. The ferocity with which she fights, all instinct, no training, is inspiring.

Another really cool thing about this series is that most of the villains are female, including the ring leader Caroline Le Fay. Many of the superheroes she recruits or hires to do her bidding are powerful ladies who chose the dark side, and I thought that was a really great contrast to our band of Defenders. I don’t see a lot of female v. female fights in comics, so if you are into that, this is the story for you.

If you want a diverse female centric run of comics with an enjoyable superhero storyline, this is definitely a series for you.