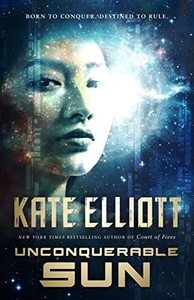 When the author described Unconquerable Sun during a livestream as Alexander the Great but gender-swapped and in space, I instantly ordered a copy. Not only could I feel good about supporting an author and an independent bookstore, but a complicated queer space opera sounded like a perfect book to unplug with in an attempt to provide myself with engaging non-screen time. And so it proved to be. Fear not if you, like me, don’t know anything about Alexander the Great–I basically only know that he had an empire and had relationships with men–because while I’m sure that adds a layer of glee in for those in the know, the plot is perfectly understandable to those with no background knowledge. I was instantly drawn into the depth of world-building, the characters, and the unfolding opera of events until I found myself staying up way too late to plow through the last few chapters.

The Republic of Chaonia is currently ruled by queen-marshal Eirene, who brought Chaonia to prominence on the galactic stage through decisive military and diplomatic victories by driving the Phene and Yele out of their territory, and she is widely respected as a brilliant military leader. The book opens with her heir, Sun, winning her own debut military victory in a bid to follow in her powerful mother’s footsteps. Accompanied by her Companions–members of the other ruling houses sent to attend the queen-marshal and the heir as both a sign of cooperation and as political hostages, Sun tries to cement her own place in the line of succession, in the war to keep Chaonia free of the Phene, and in the power struggle constantly surrounding her. Throw in a royal marriage, numerous assassination attempts, and several more battles, and the action never stops. But Sun’s calm, decisive manner, and then ease with which she directions her Companions and those around her also serves to shepherd the reader through the action. It’s rich and exciting and complicated, but it’s not difficult to follow, which is a line many space operas fail to walk.

Besides having very clear and dynamic action scenes, Unconquerable Sun handily introduces a huge cast of characters and sets up some really great relationships. Besides the queen-marshal and her Companions and consorts and Princess Sun and her Companions, the Companions can also have Companions, called ce-ce’s. Less political appointment and more highly trained employees, they nevertheless help make up Sun’s inner circle. Most of Sun’s Companions are set at the beginning of the novel, but it’s the assassination of one of her favorites, along with his ce-ce, that really sets up the crux of the interpersonal dynamics. Plucked from what she thought was a solid cover identity hiding from her family in the military academy, Persephone is given a new ce-ce, Ti, and shoved into the role as her House’s Companion replacement delegate to Sun with little warning and little preparation. As brash as Sun, but less experienced and less polished in diplomacy because of it, Persephone has to figure out what’s going and how to get free of the machinations of her family on while staying alive, and Sun has to figure out how far she can trust her new Companion and her ce-ce. Sun is also dealing with her relationship with one of her other Companions, Hetty, which has been ongoing for a while and must remain hidden, because an heir or queen-marshal is not supposed to show favoritism to a Companion, and she also knows that political marriage is likely in her future. Both her and Hetty’s feelings run deep, however, and their deep and abiding love for each other rings through every interaction they have. “When Hetty smiles, the universe smiles,” Sun thinks early on, and I love to see such a complex, no-nonsense character also act so smitten. The characters are rich and complex, and they become fully fleshed out as the action unfolds around them. It really drew me in and had me invested really fast.

In conclusion, Unconquerable Sun was an intricate and engaging space opera that I would not hesitate to recommend to anyone who likes sci-fi. It has all of the space elements that sci-fi fans crave, while retaining the complex, character-rich action that readers who want more of a saga will love.  Its queerness is woven into the very fabric of the story, from the setup of the court, to Sun’s relationship with Hetty. And it left me wanting more. This is an exemplary beginning to what promises to be an epic series. The queer space quarantine read that we all deserve right now.