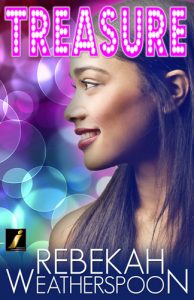 In these trying times, the romance stories I am drawn to most right now involve two characters taking one look at each other and going “Oh.” Enemies to lovers or any variation thereof has its place, and is a trope I do enjoy, but right now what I want is two characters just being into each other. Treasure by Rebekah Weatherspoon fulfills that need. It’s a cute rich girl/working girl novella featuring two black characters, one of whom is a stripper and the other of whom is still trying to get a feel for her own sexuality and style.

Alexis Chambers is a freshmen in college who is trying to figure out her identity amongst family expectations and the pressures of going off to college. Trisha “Treasure” Hamilton strips nights to make money and is going to school so she has a good career after she’s done with dancing. They first notice each other during Alexis’s sister’s bachelorette party at the club where Trisha works, and then later they find out they have a class together. The connection between them is almost instantaneous, although Alexis is shy, leaving Trisha to make the first moves. Although they come from different backgrounds, and each has their own family issues, their instant attraction is undeniable. CONTENT WARNING: There is talk of a suicide attempt in Alexis’s past. It is talked about, but there’s no graphic flashbacks or descriptions.

What I liked most about this book is how sweet they both are towards each other. Alexis is head over heels about Trisha but suffering from low self-confidence. Trisha is besotted with Alexis but dealing with her own baggage. But their sheer attraction to each other makes every milestone–from holding hands to having sex–both supercharged and incredibly sweet. It’s adorable and every page made me so happy. I also love that they are both aware of their own and each other’s issues but are determined not to push or make the other feel uncomfortable. I also love how chill Alexis is about Trisha’s stripping. It’s refreshing because it feels so natural to Alexis and Trisha is so charmed by it. It’s just good to read about characters who are unambiguously into each other.

My only complaint is that the climax felt a little contrived. It’s the most obvious roadblock to introduce to their relationship, but to introduce it, there’s a very contrived appearance by a minor character. It all felt very “well they need to have at least one (1) problem.” But honestly that’s not a terrible problem for a romance to have, and, obviously, they make up very quickly.