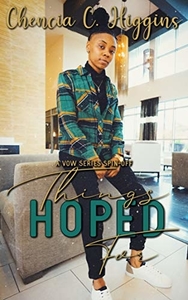 I picked up Things Hoped For at the beginning of the year, out of a list of f/f romance coming out this year, I believe. Or maybe Black romance authors? Perhaps Black LGBT authors. There were a lot of lists floating around Twitter in March/April, and I bought a lot of books, both to support authors and because I suddenly had a lot more reading time on my hands. I was excited to see a butch woman on the cover, and as a novella, so the trope of the day is instant connection, which means instant gratification on cuteness, which was exactly what I want a lot of right now. I haven’t read the rest of the series, since they are M/F and I wanted to skip right to the F/F, but it was easy to get into, and Xeno and Trisha, the main characters, are adorable together. If you’re looking for a romance novella, I highly recommend picking it up.

First of all, this is a relocation romance. Trisha wants to move away from her rural hometown in order to be around a bigger circle of queer community than her area offers. As a massage therapist, her skills are easy to transfer to Houston, and she knows people in the area, presumably the people from the afore-mentioned M/F books. She’s excited to be in a bigger city and be able to meet new people and find a wider LGBT community. I really love the possibilities here, and the journey for more community is a familiar for a lot of us. When her friends in town invite her to see a concert by queer, butch rapper Xeno, she leaps at the chance to go. Xeno is a rapper who has firmly established herself on the Houston circuit and is ready to expand her audience. A savvy businesswoman with a firm grasp on all aspects of her music career, Xeno is nonetheless somewhat shy around people she doesn’t know. A chance encounter with Trisha backstage is instantly enchanting for both women.

This is also a romance about someone dealing with rising fame. A major rapper samples Xeno’s work in an interview and suddenly her popularity skyrockets outside of her Houston circuit, and she’s booking gigs out of state. She finds the increasing fervor of her fans outside of concerts disconcerting, even as she revels in the energy onstage. But Trisha is outside of that, and their growing relationship is lowkey, hot, and super cute. They go on super adorable dates and are very soft with each other. And Trisha’s career means she can schedule patients and be able to travel to Xeno’s concerts. They’re very cute and when they get together the sex is very hot. There’s not a whole lot of conflict here, but that’s pretty standard in romance novellas, when entertainment is the name of the game.

In conclusion if you’re looking for a quick, hot f/f read, you could do worse than to pick up Things Hoped For. It’s steamy, it’s familiar and comforting to everyone that’s had to relocate to find queer community, and it’s entertaining. I had a thoroughly good time reading it, and I recommend that you do too.