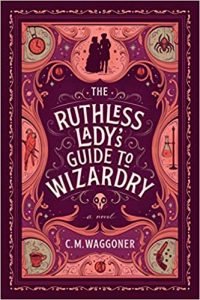 I have been so excited by all the f/f fantasy coming out lately, and The Ruthless Lady’s Guide to Wizardry is an excellent addition to the genre. It’s a fast-paced adventure story laced with a sweet romance, set in a sort of Victorian-inspired society with the addition of magic, trolls, and other fantastical elements.

Dellaria Wells is a fire witch and con artist from the bad part of town. With her mother being addicted to drugs, Delly has had to take care of herself from an early age, with greater or lesser success. Stuck between paying her rent and being cursed, Delly takes a wild chance and talks her way onto a gig with a team of female bodyguards to guard a high-class bride from assassination until her wedding day. Delly is anticipating an easy couple of weeks and a rich payday, but she didn’t count on multiple wizardous attacks, murder, or undead animal familiars. Soon after, Delly and her companions are embroiled in the underground drug market in a wild bid for justice (and a huge reward). Along the way, Delly is astounded to find herself having feelings for one of her fellow bodyguards, and, even more surprisingly, those feelings are reciprocated.

What I enjoyed most about this book was that it was a good, solid adventure story, but at the same time, the romance was so soft. Delly tries to talk a good game that she’s only out to set herself up in a good situation, but as a reader you know both characters fall head over heels almost right away. Delly is a funny, competent main character–able in her magic and confident on the streets–but she’s not prepared to dabble in the affairs of the rich. Winn, on the other hand, moves through life with well brought up confidence, but isn’t used to less than straightforward endeavors. She’s also utterly enamored with Delly. Watching them circle each other sweetly while embroiled in high stakes adventure is a treat, and I love how nice they are to each other. It doesn’t feel like as much as an afterthought or a grim plot device as fantasy romances often are.

I also thought the plot was really engaging. From the fish out of water element of Delly amongst the nobility to several ripping good fights to Buttons the undead mouse, I was never bored or waiting for something else to happen. The author has a clever turn of phrase that brings one into Delly’s point of view and sets up a lively mood. And Buttons is really a whole mood in itself. I also liked that Delly was frequently out of her element, but also very good at her job–she just needed an opportunity to prove herself.

In conclusion, this was a delightful read with a thrilling fantasy adventure plotline and a very soft romance. If you like Victorian-themed magic, excellent world-building, and girls having intense feelings for each other but wanting to go slow, this is a great add to your to-read list. I’m definitely going to be recc-ing it around to my friends.