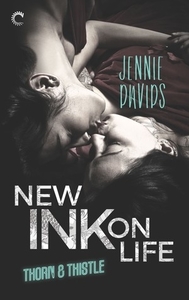 New Ink on Life by Jennie Davids is about apprentice tattoo artist Cassie Whiteaker coming to finish her apprenticeship at the shop of MJ Flores. MJ is initially put off by Cassie’s shyness and appearance, but takes her on because they both have the same former mentor. MJ also learns that Cassie is a cancer survivor who wants to do cover-ups of mastectomy scars. They strike a deal wherein MJ will finish Cassie’s apprenticeship and teach her how to be more assertive and stand up for herself, and Cassie will help with new business ideas for the shop, which is still struggling to find its feet after a messy breakup between MJ and her former girlfriend and business partner.

New Ink on Life had a lot of things I liked in it – tattoos, cancer survivors, quitting corporate jobs – but I felt like the relationship did not find its feet until the second half of the book, and it took me that long to feel like the main couple really worked together. From the start, MJ is overly abrasive – I have no idea how she found enough people to run her shop with like that – and Cassie seems too timid to give her a chance. It felt like there was too large of a gap between them, it made it hard to believe them clicking long enough to have their admittedly excellent sexual chemistry. It’s nice when they get along better – they even go antiquing, although that doesn’t necessarily go smoothly.

But the second half of the book does flesh out their relationship much better. Although we don’t get much insight into MJ’s old relationship and shop, we do get some backstory with her family and how it contrasts with Cassie’s backstory with her family. We also get more about Cassie’s history with cancer, and how she is coping with life after. MJ eventually softens her attitude some and becomes endearingly supportive of Cassie. The time they spend together fleshes out their relationship enough that by the last third of the book, I think they really work well together by the end, even if I can’t believe they made it long enough to get that far. Cassie does some good business plan ideas for the shop, and there’s some good contrast with how poorly MJ’s ex’s shop is run. It made me believe that Cassie really did love tattooing enough to quit her job and take an unpaid apprenticeship for it.

If you really love a dynamic of an abrasive personality being softened up by a nicer partner, maybe this book would be more for you. Or if you love any romance centered around tattooing, you should absolutely take a look. But, although I ended up enjoying it by the end, I think I’ll look in another direction for my romance reading.