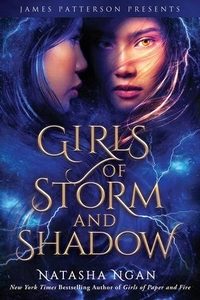 I am always excited for queer fantasy, and I enjoyed the first book of the series – Girls of Paper and Fire – so I was quite excited to get to Girls of Storm and Shadow. Lei and Wren had been through so much in the first book, and I was excited to see how they’d come together in the aftermath. They had killed the King, and there was rebellion to shift power in the kingdom, and they were no longer concubines. There was a lot to build off, and a budding love story to watch. But Girls of Storm and Shadow had a very different tone from the first, not all of it an improvement, in my opinion. Although there was a lot of action, and it further revealed the extent of the rebellion against the King, it seemed to lack a lot of the urgency of the first book to me, although I’m still eager to see the final book.

The book picks up with Lei, Wren, and their band of escapees in the mountains, trying to gather up support for the rebellion. The book once again examines the trope of the pivotal figurehead of the rebellion, in that technically that is Lei, but she isn’t actually very helpful to them. The rumors of what happened in the palace have spread, making Lei into the Moonchosen, but outside of her title she has little power. She also can’t take care of herself in the mountains. Although she is the one that stabbed the King, she doesn’t actually know how to fight. Being from a common family, she has no useful political connections to bring to them. All of this forces Lei to play catch up, cramming weapons practice into their grueling trek, forcing herself to learn the survival skills the others know, and trying to glean the complicated politics of the rest of the realm. This is a fascinating twist on the usual “leveling up” montage the hero gets because the rebellion doesn’t actually seem to want her there all that much. On a personal level, the group likes her and is happy to teach her, but leadership seems to make no effort to include her into plans or, somewhat puzzlingly, change those plans to really capitalize on her presence. And the more Lei learns from being around rebellion leadership, the more she’s uncertain about what she’s signed on to do.

To my surprise after the smoldering intensity of the first book, Lei and Wren’s relationship quickly took a turn for the worse in the second book. Lei was still committed, but Wren distanced herself. She didn’t want to reveal their relationship to her father, and also didn’t appreciate Lei’s questions about her father’s intentions for the rebellion. And yet there’s also an ex that immediately pulls Wren’s attention once they come back into contact. Both of these storylines are not bad relationship storylines in general, necessarily, but they were not what I was expecting from the tone of the first book, and it left me disappointed in Wren.

There is also the typical second book of a dystopian trilogy “everything gets unbearably worse” happening, but it’s not just the rebellion’s prospects of winning that seem dim. As Lei tries to help them with their next moves, she realizes just how unprepared she was for the politics of the rebellion. She also learned how deep Wren is in those politics, and what she finds is not great. There are also some large discoveries that I don’t want to spoil, but that change things dramatically. I was prepared going into this book for things to get worse before they got better, but this book also seemed to take place over a relatively short period of time and yet get very little done. Up until the final act, it seemed they spent interminable amounts of times traveling during which there wasn’t as much action as I had come to expect from the first book.

In conclusion: this is very clearly the second book of a trilogy, and it took a very different tone from the first book. Wren and Lei’s relationship fell apart, the rebellion seems lackluster and barely better in ideals than the establishment, and a lot goes downhill at the end. But that’s pretty standard second book stuff, so I’ll reserve my judgement on the series as a whole until I see how the third book wraps it up. But this one was a little more difficult for me to get through than the first one.