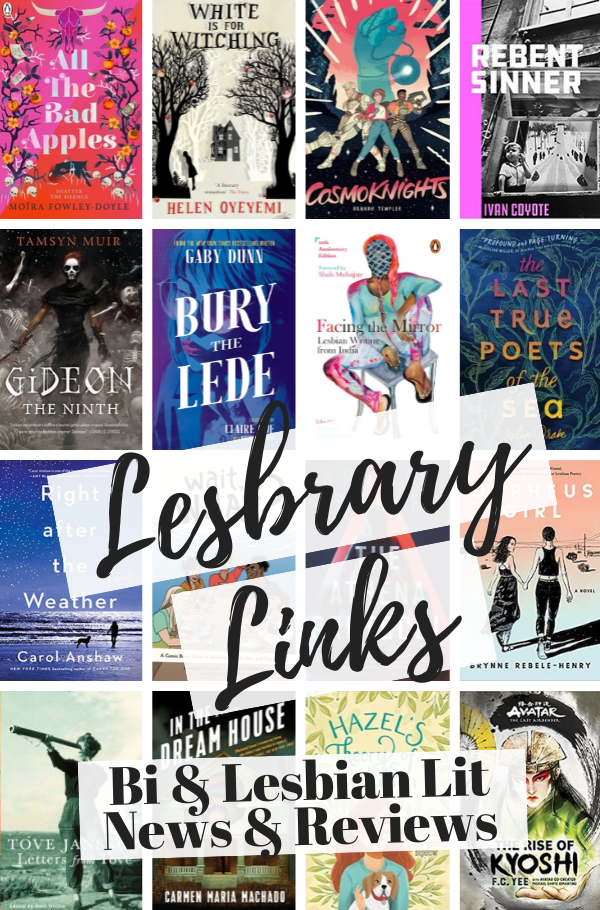 Autostraddle posted A Visual History of Batwoman’s Most Badass Moments and 8 Queer Halloween Reads for Your Gay Spooky Needs.

Tegan and Sara were interviewed about their book High School at NPR.

Michelle Tea was interviewed at Dazed.

“When Lesbian Publishing Made It Big: A graphic tribute to the landmark Naiad Press” was posted at The New York Times.

“Authors and activism: A history of LGBT bookstores” was posted at Out In Jersey.

Right after the Weather by Carol Anshaw was reviewed at Lambda Literary.

Wait, What?: A Comic Book Guide to Relationships, Bodies, and Growing Up by Heather Corinna and Isabella Rotman was reviewed at Autostraddle.

Dreadnought by April Daniels was reviewed at The Vanderbilt Hustler.

Bury the Lede by Gaby Dunn was reviewed at Logo.

All the Bad Apples by Moïra Fowley-Doyle was reviewed at Lambda Literary.

Stray by Nancy J. Hedin was reviewed at Lambda Literary.

In the Dream House by Carmen Maria Machado was reviewed at the Brooklyn Rail and Frieze.

Colony by Leigh Matthews was reviewed by Casey the Canadian Lesbrarian.

Gideon the Ninth by Tamsyn Muir was reviewed at Culturess and The Mary Sue.

Facing the Mirror: Lesbian Writing from India edited by Ashwini Sukthankar was reviewed at Firstpost.

High School by Tegan and Sara was reviewed at Rolling Stone, Paste Magazine, and Autostraddle.

The Rise of Kyoshi by F.C. Yee & Michael Dante DiMartino was reviewed at Rich in Color.