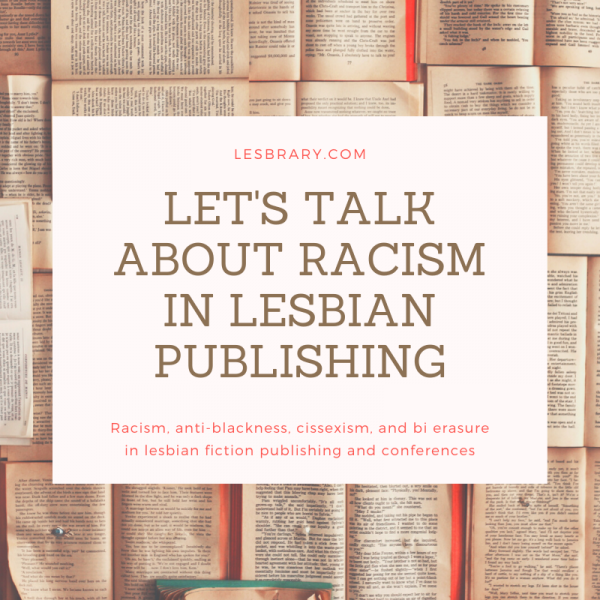 As we continue to have an international conversation about anti-blackness and systemic racism, it becomes more and more obvious how racism exists in every industry, and needs to be rooted out and addressed. Recently, KD Williamson, a Black f/f romance author, brought this discussion to the forefront in lesfic.

[Edited to add: of course, Black authors have been speaking out about this for years:]

Yes. I'm glad this is getting more visibility, but please know that Black writers have been screaming about this for years. This conversation did not start the other day. https://t.co/BkpEVHsYZN

First of all, what exactly is “lesfic”? It’s an abbreviation for “lesbian fiction,” but it’s usually used to mean a certain kind of lesbian fiction. It’s almost always f/f romance, and it’s usually published by a lesbian publisher (like Bold Strokes Books, Bella Books, or Ylva Publishing). Although I obviously read a lot of queer women lit, I’ve never been very involved in the “lesfic” world, so take these opinions with a grain of salt, but this is what I’ve observed. Lesfic seems to be a pretty insular environment. Authors are almost entirely white, middle-aged women–at least, the ones who get the most press are. It’s also specifically lesbian. Although there is the occasional bi woman character, that’s only when they’re in a f/f relationship, and even that is pretty rare.

GCLS is the Golden Crown Literary Society, an organization that promotes lesbian literature. It began in 2004, and began giving out awards and holding annual conferences in 2005. It’s this annual conference that began the conversation on twitter. KD Williamson pointed out that the conference’s invited authors are overwhelmingly white. This is not new, but it’s particularly troubling because this year’s event–due to COVID-19–was held entirely online. Because no one had to travel to participate, it offered an opportunity to reach out to a more diverse selection of authors. Unfortunately, that’s not what happened.

KD Williamson also pointed out that her complaints are about the homogeneity of lesfic as a whole: not just the lack of Black authors, editors, etc represented, but of people of colour in general, of bisexual people, of trans people.

Other authors began to join in that they, too, have experienced feeling unwelcome at GCLS. Amanda Radley wrote about how last year she had asked GCLS to change its naming conventions to be more accepting of bisexual and other non-lesbian queer authors. In response, GCLS changed the language to “lesbian-themed” instead of lesbian (??), but rejected the motion to include “bisexual” or any other labels.

I’m not at Golden Crown this weekend. I haven’t been for the last couple of years. There’s a bunch of different reasons for this, including cost, but here are the main ones: 1. As a bi/queer writer, I felt less and less welcome in recent years. 2. Lesfic feels/felt very insular.

One Black author mentioned feeling unsafe at lesfic conferences because she found that some white authors there wouldn’t even speak to Black authors. Stephanie Andrea Allen spoke about trying to reform the GCLS awards process from the inside, and realizing that it was going nowhere, and wasn’t worth the energy:

Um, I was on the committee that redid the way they do the judging a few years ago and I knew then that it was hopeless. When was the last time a Black or writer of color actually won an award, not a trailblazer/legacy" award? Expanding the categories doesn't change the culture.

Many authors talked about how they had quietly walked away from GCLS and not bothered to even submit their books for awards, because they knew they wouldn’t be chosen. Rebekah Weatherspoon spoke about how being used as a token women of colour made for painful lesfic conference experiences:

Those who were trying to make thing more inclusive didn't understand how emotionally damaging it was for me to be the only in the room. I couldn't put myself at risk and definitely trust these white women enough to put more Black women in harms way for the sake of diversity.

This isn’t isolated to GCLS, however. It’s a systemic problem–in publishing in general, but also in lesfic in particular. Publishers and event organizers to drastically change to address this. Here’s what I suggest they do to get started:

1) You can’t fix a problem until you’ve identified it. Do you have data on your organization?

2) Do those numbers reflect the greater population?

3) What are your internal policies around antiracism?

4) If your organization is disproportionately white, what strategies will you use to fix that?

7) While you are doing this work, consider other intersectionalities: most of these same questions should be asked for disabled people and trans people as well.

To be clear: I can only speak from my own perspective, and I’m white, so I will have oversights. Please add anything I’ve missed! The Lesbrary has a long way to go, too. I only recently added a max percentage of white authors to cover as a reviewer, and I need to diversify my own reading more, and reach out to more reviewers of colour. I commit to keep doing this work.

[Edited to add: The imprint was also started for male and non-binary authors, however, and it looks like so far only one of the three authors they have signed on is a person of colour, though the imprint is new and still revolving. KD Williamson also points out that separate imprints for authors of color is not what they’re asking for:]

This can sometimes be a veiled microaggression to keep POC/AOC from competing with the white folk. It can be used to placate so they can say 'see what we did for you?'
Separate but equal.
SHAME ON YOU.

This isn’t a particularly organized post, because the situation is still evolving, but I wanted to put it out there as an introduction into the conversation, especially if you’re not on twitter.

Finally, if you’re looking for Black f/f authors, here are some of the names that came up during this conversation!

As well as the organizations Black Lesbian Literary Collective and Sistahs on the Shelf.

At the Lesbrary, you can also check out:

While you’re here, check out the Black Lives Matter carrd for petitions to sign, places to donate, resources to educate yourself, and more. Also, support Black LGBTQ authors and Black-owned bookstores.

2 Replies to “Let’s Talk About Racism in Lesbian Publishing”