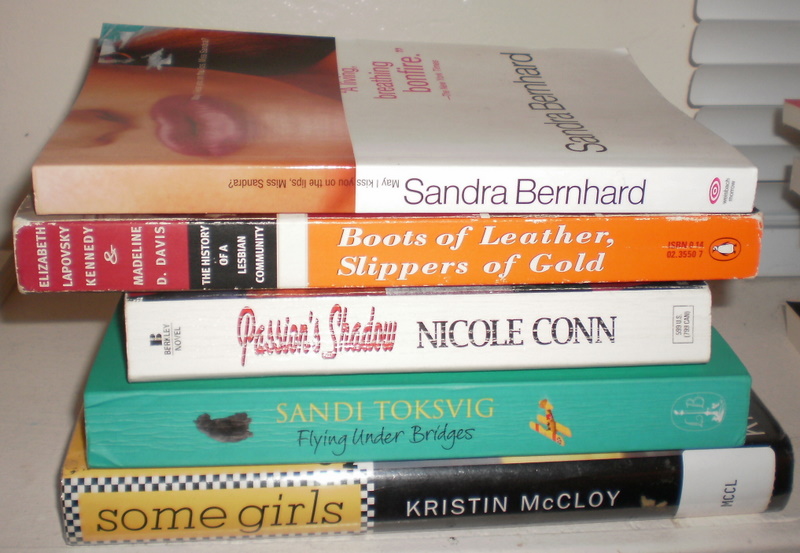 Lesbrary Sneak Peeks are when I show you some of the books I’ve gotten lately that I haven’t read yet. I tell you a little bit about why I want to read them and hopefully expose you to some new les/etc books. Here are a few:

May I Kiss You On the Lips, Miss Sandra? looks hilarious. This is one of those sneaky gay books that end up on my les/etc book stacks and then attracts a skeptical look from me. The cover, the back blurb, and the Amazon reviews 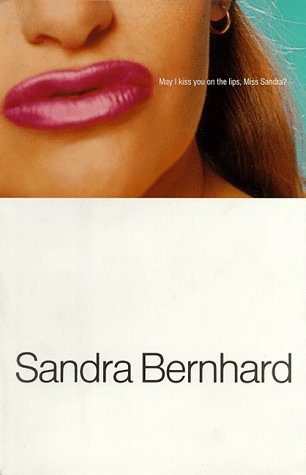 don’t mention any queerness… but that’s exactly why I made a lesbian book blog. Because some fly under the radar. This is the memoir of a queer celebrity comedian, Sandra Bernhard. The internet can’t decide if she’s lesbian, bisexual, pansexual, or something else, but that’s good enough for me.

I’m looking forward to Boots of Leather, Slippers of Gold because it’s lesbian history. I was never too interested in history in school, but queer history is different. It’s particularly relevant to me. The fights they started, we’re still fighting. This one seems particularly fascinating because it’s so tightly focused (Buffalo, NY, 1930s-1960s) and because it’s gathered from oral histories of 45 women.

I’ve heard great things about Nicole Conn’s Claire of the Moon, though I haven’t read it yet, so it’s not surprising that I picked up Passion’s Shadow. It sounds like it will be a mystery and (steamy?) romance story and seems to have gotten good reviews, so I hope I like it. 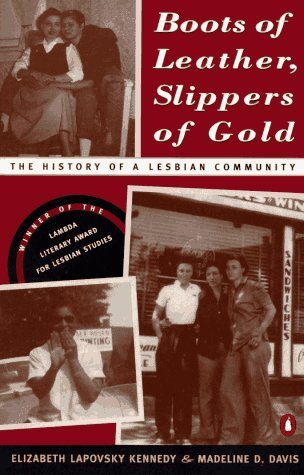 Flying Under Bridges by Sandi Toksvig is another sneaky gay book, but my google-fu has determined it belongs here. The reviews intrigue me. Murder! Hilarity! Lesbians! Okay, you’re right, “Lesbians!” usually intrigues me in itself, but the other two are interesting, too.

Some Girls by Kristin McCloy, from what I gather from the blurb, is about a 23-year-old woman, Claire, who runs away from her old life to try to make it in New York. She meets up with a glamorous woman who is everything she wants to be (aah, that age old les/etc question: “Do I want to date her or be her?”), and “becomes first Claire’s guide, then something far more intimate.” After that, Claire is forced to make choices that will change her life forever! Excitement or safety! Love or familiarity! Scandalous.