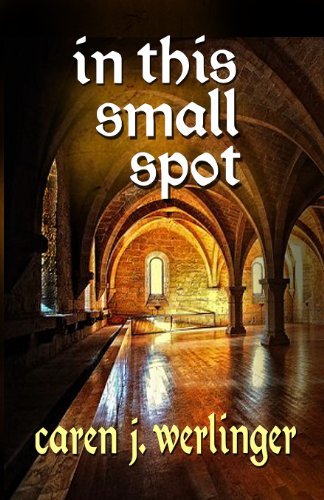 While it’s clear that In this Small Spot, Caren J. Werlinger’s abbey epic, is a love story, it is ultimately a book about excess and restraint.  The story’s arc is massive, sprawling across five years and numerous memories.  It’s a lengthy commitment, but luckily the prose moves along at a nice pace.  Werlinger has a good sense of when to summarize and when to linger in a scene.

Within the expanse of the story, Werlinger has created a world so thoroughly fleshed out that at times it’s a little overwhelming.  The plot follows Mickey, a successful surgeon who decides to give up her practice and teaching position to become a nun at St. Bridget’s Abby.  What follows is not only an incredibly detailed account of Mickey’s journey but of the entire abbey itself.  The book overflows with characters and while they are all interesting and many do contribute to the plot, some of them felt like they needed their own separate books.

During her time as a postulant, Mickey meets the imposing Sister Anselma who becomes her mentor.  With her help, Mickey starts to process the guilt she feels over her partner’s death and her place within the world of the abbey.  The two grow closer and begin to fall in love, despite their religious vows and obligations.  Their relationship is one of extreme restraint as they attempt to deny their feelings for each other and navigate the theological dilemma of their situation.

This conflict between the restraint of the subject matter while the plot leaps and bounds around it feels like the book’s true strength.  The balance between the characters’ careful negotiation of their relationship while other drama rages around them makes the moments they do find together all the more powerful.  Unfortunately Werlinger can’t quite sustain it and in the end her careful building succumbs to the excess of plot and this reader, for one, just wished the characters could have been left at a quiet moment and allowed to rest.